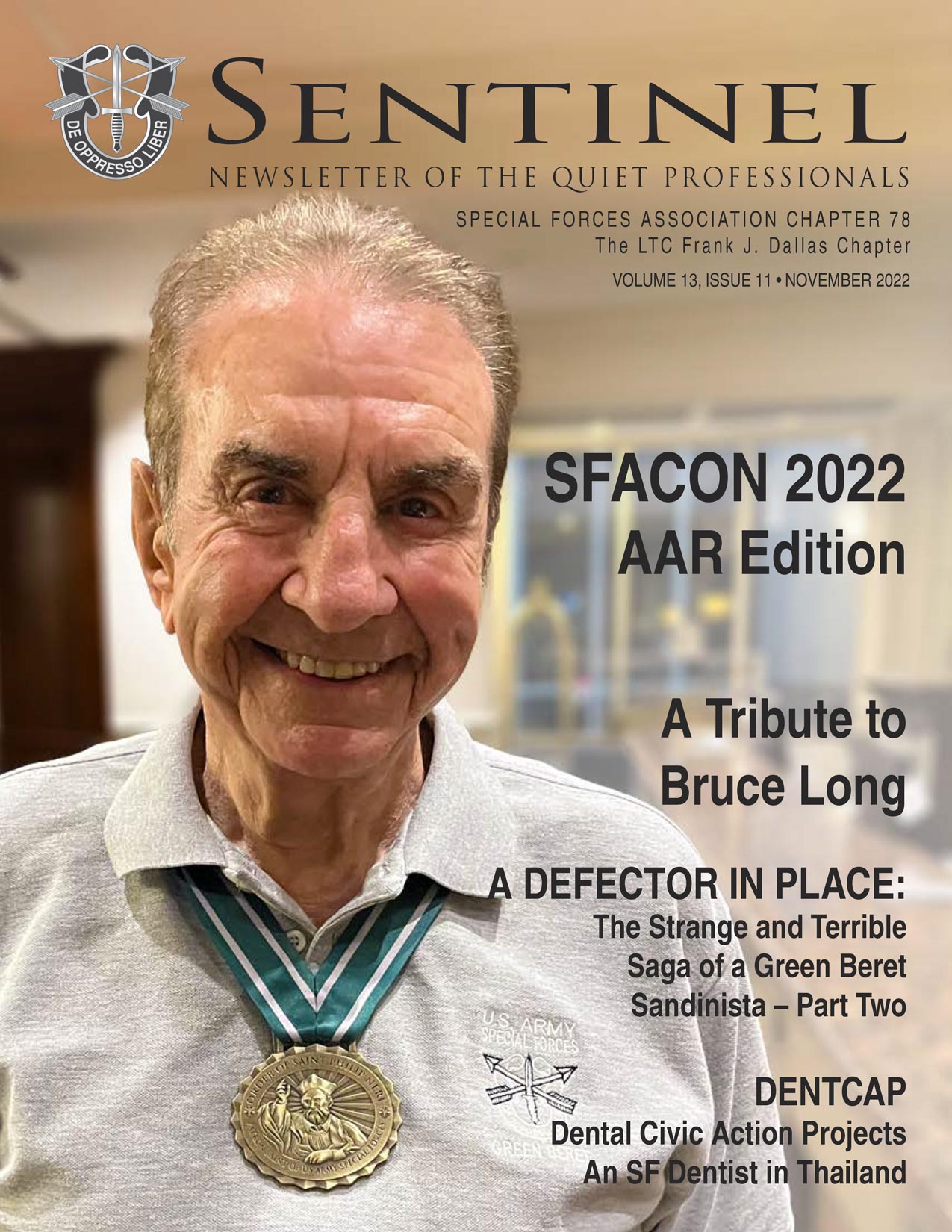 As you may or may not have learned, Command Sergeant Major (ret.) Robert “Spider” Parks passed away on October 29 after a serious fall while on a business trip in the Philippines. According Greg Walker, he was there to continue his search for the Missing In Action/Killed In Action.

Bonnie Cooper has started a GoFundMe fundraiser for the family to help them with the expensive process of getting Spider’s body repatriated to the USA.

To learn more and/or to make a donation visit the GoFundMe page at
https://www.gofundme.com/f/spider-parks-repatriation-and-funeral-funds?viewupdates=1&rcid=r01-16673

To quote Bonnie, “He has an extensive network of friends around the world, and was always the first to step up and help others. With your help, we can bring him home.”

Be sure to check for the two postcard included in the current DROP.

Cast your vote for the three proposed SFA constitutional amendments. A postcard for voting was included with the last issue of The DROP. You may also cast your vote electronically through the Teamhouse website (November 1-30, 2022). If voting by mail, the postcard must be postmarked NO LATER THAN 11/30/2022.

Another postcard was included to provide members with an opportunity to opt-out of having their name, address, and email address shared with the Association of the United States Army (AUSA). AUSA and SFA have recently entered into a new partnership, which will allow all active members a complimentary AUSA membership. If you would prefer to opt-out and forfeit AUSA benefits, mark the postcard and return it. Mail in responses must be post- marked NO LATER THAN 11/30/2022. Members can opt-out electronically through the Teamhouse website (November 1-30, 2022).

We begin this issue with the man on the cover, Richard Simonian. As a Chapter 78 member, treasurer, and former chaplain, Richard has truly helped in many ways this Chapter to grow, thrive, and achieve its purpose. At SFACON 2022 he played a couple of roles, one as recipient of the prestigious St. Phillip Neri Award. Alex Quade wrote of her interview with Richard after the convention, letting him describe how excited he was to receive the well-deserved award, and how his SF experience served him through his entire life.

His other role was in a roundtable discussion, as one of the four remaining “Originals” from the first years of Special Forces. Alex goes on to describe that event, as well as cover the many activities at SFACON 2022, in “What It Was All About.” Reading it made we wish I could have attended.

Then we have a couple of pages of Chapter 78 enjoying the convention, put together by our graphic designer, Debra Holm, with just a few of the photos taken by Jim Duffy, John Stryker Meyer, and Greg Horton.

In “Remembering Our Sacrifices” by Alex Quade, she shows how much of the SF family she is by poignantly describing the speech by Gold Star Wife Norma Donlon, the gratitude shown in the dinner keynote speech, and interviewing other members of Gold Star Families. They are the ultimate examples of the sacrifices made by the families of our regiment.

“Dentcap” is a result of another “Letter to the Editor.” We had another member, Bob Reed, write about his PSYOP operation in the Lop Buri area of 1970 Thailand with 46th SF company. He will also be the guest speaker at our January Chapter meeting.

And the wait is over! We have Part 2 of Greg Walker’s story about Green Beret, David Baez, and his fateful operation with the Sandanistas. Greg has done us a great service by bringing attention to the very significant role SF played in Central and South America in stopping the surge of Communism. I’ve had comments by numerous members who were totally unaware of those SF exploits Greg authoritatively and interestingly describes.

We close, appropriately with Debra Holm’s eloquent tribute to Bruce Long, another of the great builders of Chapter 78, our Chapter meeting photos, and a friendly reminder regarding the postcard enclosures included with the latest DROP.