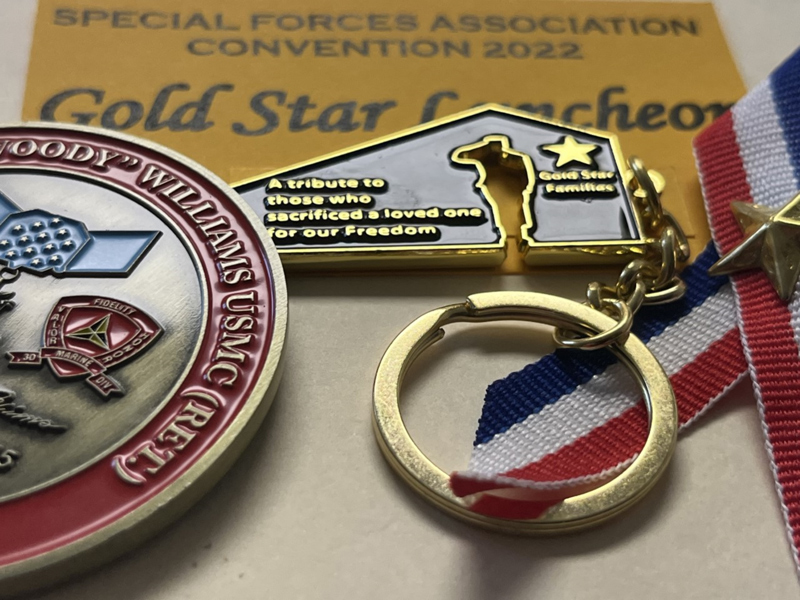 (Author’s disclosure: this reporter gave MOH Gold Star Memorial pins and keychains, given to her by her friend, WW2 MOH recipient, Chaplain Woody Williams — RIP — to each of the Gold Star Family Members she had the honor of spending time with at SFACON 2022.)

“My first husband, 1LT John W. Irving, Jr. is one of the names on the (Vietnam Memorial) wall. He was a U.S. Army Ranger KIA in an operation airlifting Vietnamese Rangers to the front. We had been married just a year when he volunteered for Shotgun duty on board a Huey helicopter. He was killed one week before he was to come home. At age 22, I became a Gold Star Wife’,” Ms. Norma began.

Then, she shared stories with the Gold Star Families and VIPs.

“A father came up to me asking, ‘Is your first husband buried at ANC?’ ‘No,’ I answered. ‘Being so young my heart wanted to spend the rest of my life at his grave and be able to visit every day.’ So, I had him buried near where I lived and worked, each day I took my lunch to the cemetery.’ ‘Yes,’ he said, ‘I understand that, my son has been gone for six years and I have coffee with him every morning’,” Ms. Norma shared.

She spoke of a mother, whose son was KIA in Iraq. His German wife moved back to Germany with their 2-year-old son. The double loss of her son and grandson was unbearable.

“I suggested she might want to register with Ancestry.com and write her son’s story, in case her grandson reached out to her someday. When her grandson turned 17, he sent an email from Germany and they are now connected a world apart,” Ms. Norma relayed.

The question Gold Star Families ask her the most is —“How do you get over it?”

Her answer is always the same —“You never get over it but you can get through it. Each person, each family does so in their own good time. It took me three-and-a-half years, but I did finally move on.”

“Her brother Dale (SSG Dale Dehnke, 5SFG) was KIA on a recon mission at CCN on 18 May 1971, his 23rd birthday. I knew him there, but he was killed after I left (Da Krong Valley, Thua Thin Province, Vietnam). Karen and I met at a SOAR over 20-years ago. Her family never knew the circumstances of his death until then,” Cliff told me. 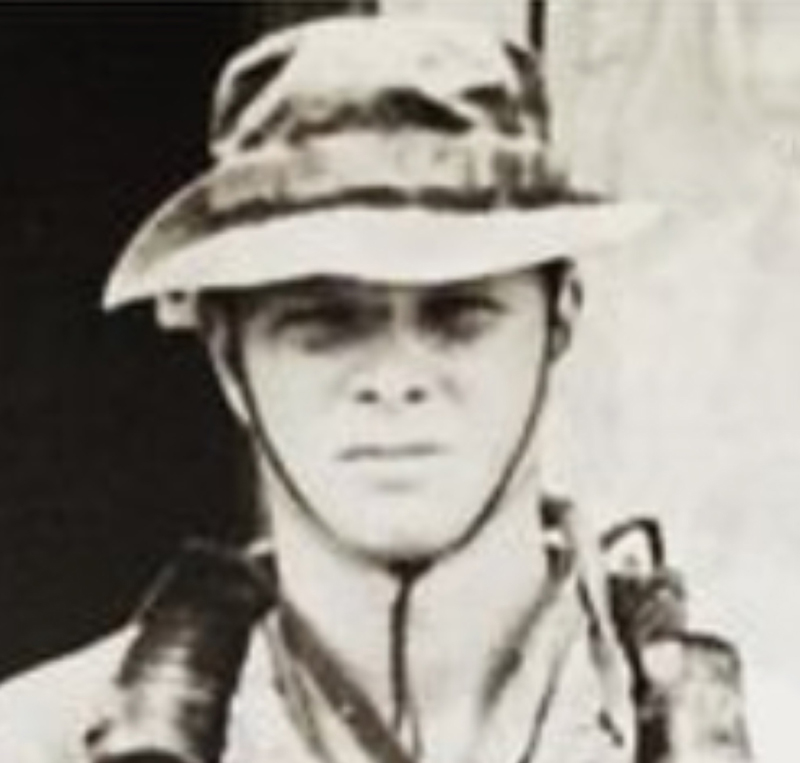 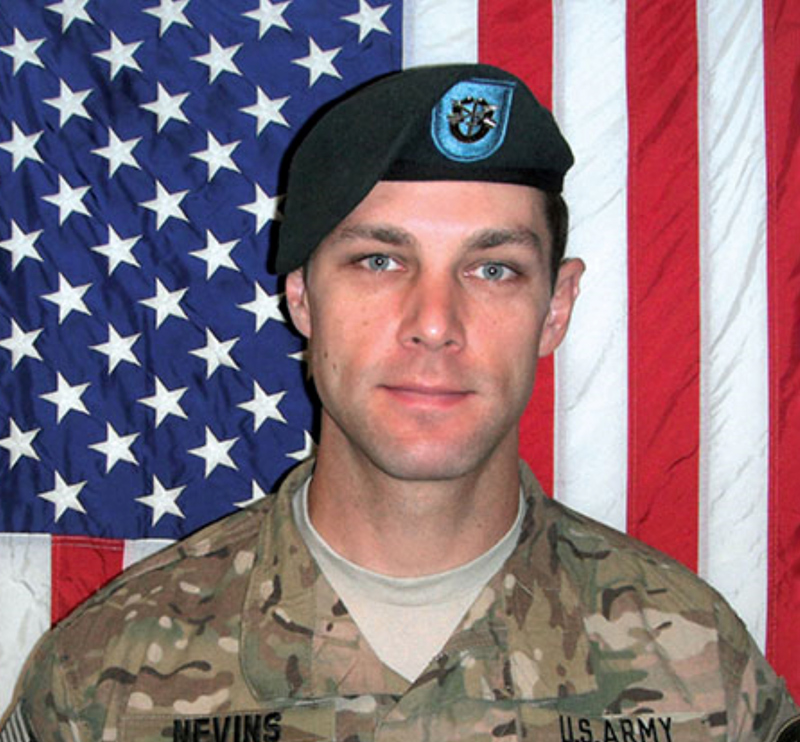 “She has found her voice, and has made a difference for other Gold Star Families, like a Phoenix rising from the ashes. When we go through adversities it is important to see the Why in them, and let them make us better and not bitter. Norma has certainly done that, and for the Gold Star Father we sat with, I know it helped him too,” Ms. Linda stated.

“He, like Norma, is also making a difference too,” Ms. Linda added.

Making a difference… was something 1st SFC DCG, BG Gil Ferguson also highlighted during the conference. 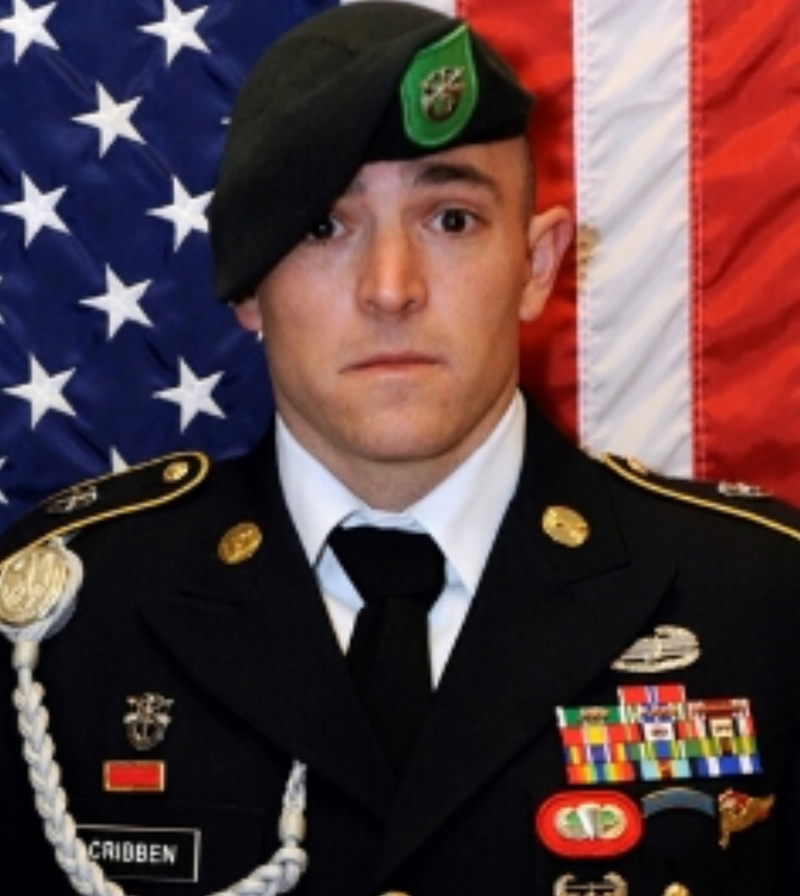 “The impact of your actions, your concern, your benevolence is most keenly felt at the level of the Gold Star families, the folks who’ve paid the ultimate price. We (he and his wife, Ms. Renee) spent last night sitting with Sarah Lindsay — Gold Star of 10th Group— her husband Will (SFC Will Lindsay, A-Co, 2nd BN) was killed in March 2019 (in Kunduz, Afghanistan) when I was Group Commander. The things the entire community has done, are remarkable. The freedom of your generosity — you’ve given her, and people like her, is tremendous and I truly appreciate that,” BG Ferguson said. “We thank you for sharing this historic anniversary with us and renew our commitment to never forget for your selflessness and sacrifice, for your loved ones and their service to this nation. Any other Gold Star Family out there. We will never forget,” LTG Braga stated.

Before the banquet… Conference Organizer LTC (ret) John Kress noticed that the gentleman printing official photographs with the Bald Eagle — wore a KIA memorial bracelet. He asked about it. Jeff Falkel shared the story of his Green Beret son, SSG Chris Falkel (1st BN, 3SFG) who was KIA AUG 2005, in Kandahar Province, Afghanistan. LTC Kress “did a solid” — impromptu mentioning the Falkels during the banquet, after the Bald Eagle’s appearance with 19SFG’s Color Guard. 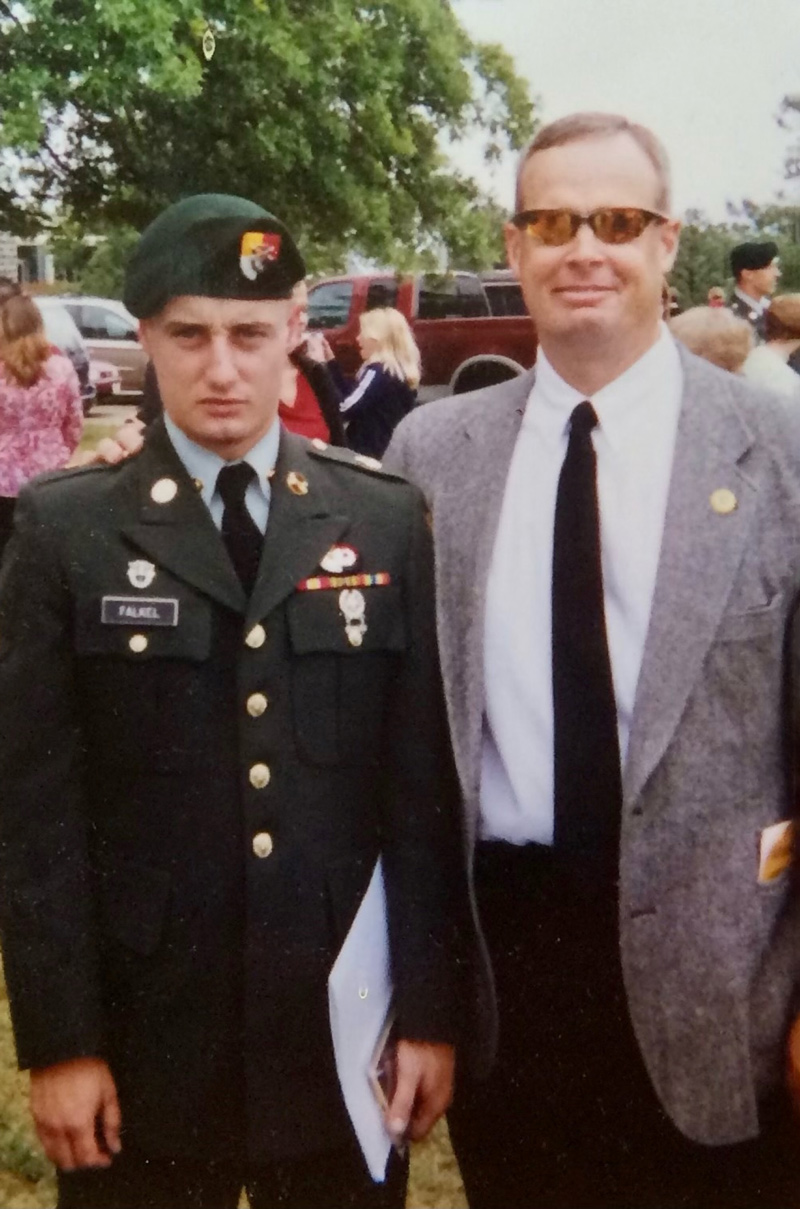 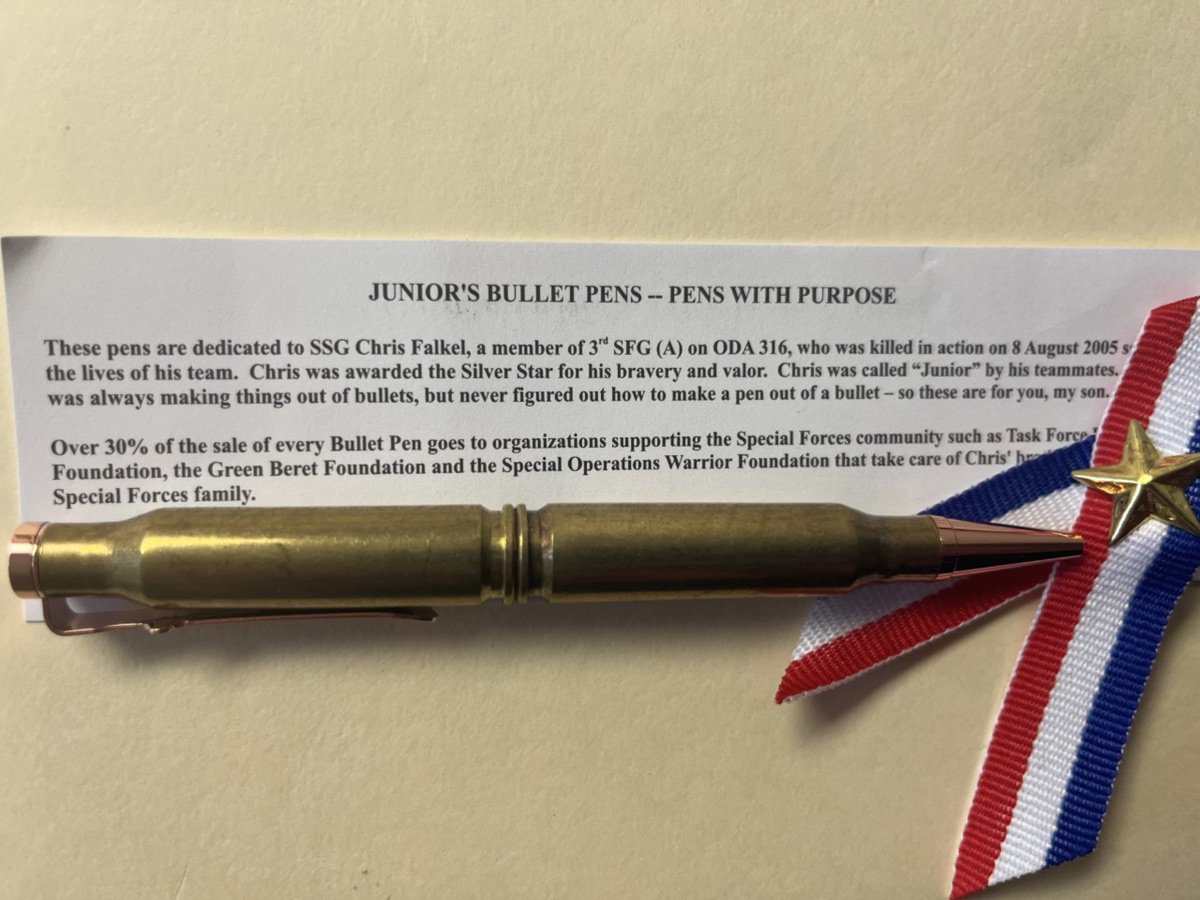 “As most of you know, a career as a Green Beret is a lifestyle, not a job. It asks as much sacrifice of the family as it does for the Soldier. Each Green Beret’s service is marked by holidays missed and an absence from key life milestones with their families. While all Green Berets and their families give up so much, this sacrifice is manifested most clearly in those who have borne unspeakable loss,” LTG Tovo said.

“We honor your incredible sacrifice. Your loved one’s sacrifice and your loss is also an integral part of the 70-year legacy of the SF Regiment,” Tovo added.

After the banquet… I asked Gold Star Father and longtime friend Jeff Falkel about the SF community and his son Chris.

“It is a family — it has remained a place for hugs. It always does my heart good for people to remember Chris and what he did. Why he received the Silver Star. Sixteen little kids have a Dad because of what Chris did — and eight kids wouldn’t have been born,” he told me.

In return, I shared with him something Gold Star speaker Norma Donlon’s MOH husband COL Roger Donlon explained to me years ago, about this SF community — “The loss of a warrior teammate is felt for a lifetime. The feelings of loss, pain, grief and yes… even guilt are real! One must find a way to deal with all these emotions,” he’d said.

Mr. Falkel deals with some of his emotions over the loss of his son, by making bullet pens out of 7.62 shell casings to honor Chris and his story — which this reporter’s shared across America.

ABOUT THE AUTHOR — War Reporter Alex Quade’s newlywed husband was blown up in Sarajevo. She helped evacuate him from the war zone and became his caregiver. Alex credits the polytrauma experience with making her a more empathetic reporter, who tries to answer the questions of our troops, and their families. In her CNN Presents groundbreaking documentary “Wounded Warriors” (CNN’s Alex Quade Wounded Warrior Special – YouTube) — Alex opened the doors for all future media coverage, with every branch of service, of wounded warriors. She obtained access to every echelon of care downrange — from point-of-injury, to back on the Home front. Among the accolades: an Armed Services “Angel of the Battlefield Award,” Intl. Medical & Health Media “Freddie Award,” CINE Golden Eagles, Frontpage Award, Headliner Award, etc. However, it meant more to Alex when the President’s Commission on Care for America’s Returning Wounded Warriors’ Co-Chairs — Hon. Bob Dole, and Hon. Donna Shalala, the former Secretary of Health and Human Services — called her into the Senator’s office to ask to use copies of her film to help educate caregivers and Administration decision-makers. Quade’s Hollywood film “Danger Close” (Danger Close Official Trailer 1 (2017) — Documentary – YouTube) follows 10SFG ODA-072 (with whom she was embedded 2007 and 2008) when SSG Rob Pirelli was KIA, Diyala Province, Iraq — and the journey to provide closure and healing for his Gold Star Family and SF teammates. For more info or to contact Alex: http://alexquade.com/