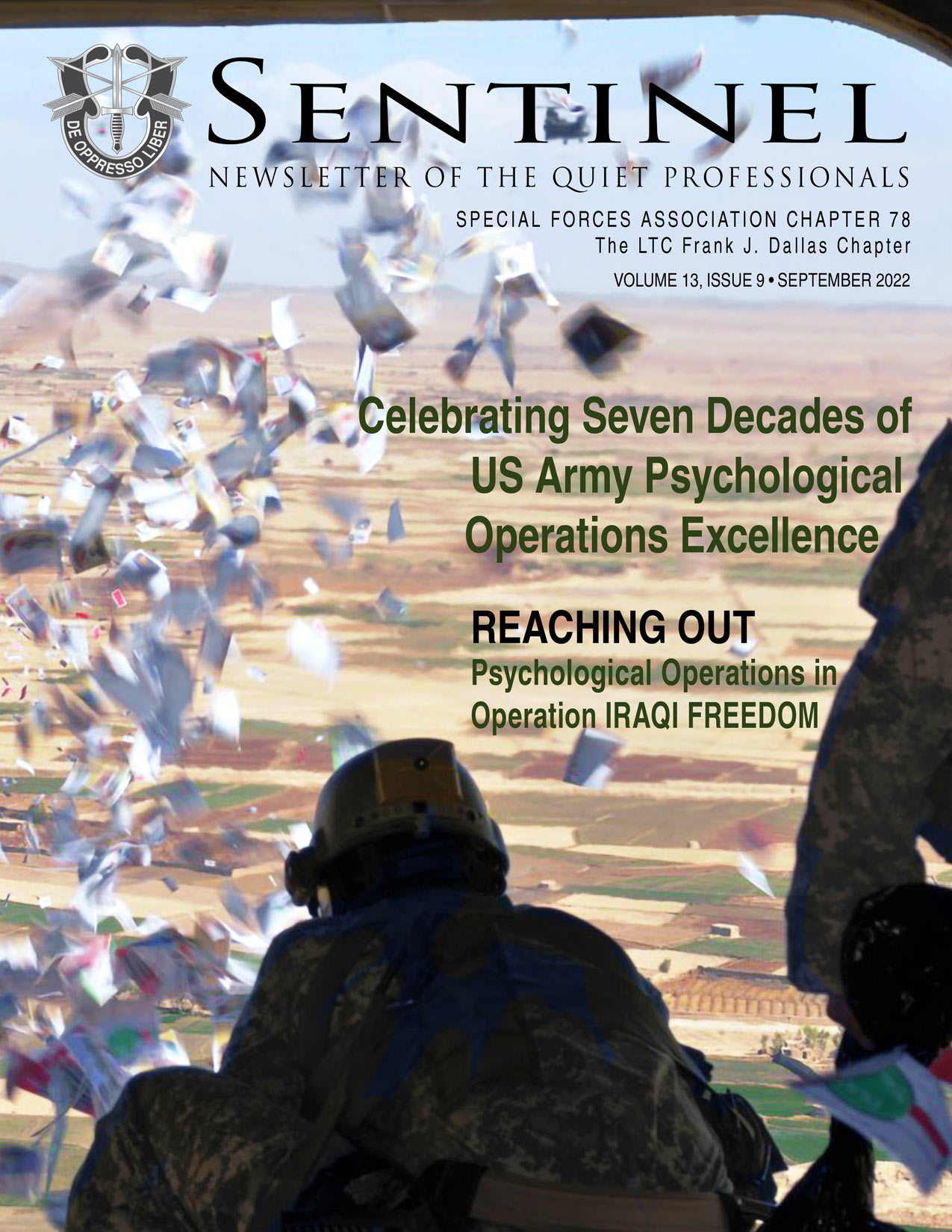 The PSYOP leaflet drop on our cover is in honor of the PSYOP theme of this issue. But we start off with a letter to the editor that brought up an issue in the realm of the more untraditional “PSYOPS.”

Our “sister unit” National Guard C/1/19 had a change of command ceremony this month, attended by dignitaries and SFA members. Here is a brief introduction to their new leadership team who are enthusiastic about continuing and deepening the relationship with Chapter 78.

We have a combined book review by two men (Kenn Miller and Greg Walker) who have known Jim Morris a long time, and all three declare their friendship. Despite the obvious conflict of interest, they have come up with a review that gets to the heart of Jim Morris’ new book, Dreaming Circus.

Army PSYOPS, in its modern form, began about 70 years ago and shares a common, intertwined role and history with SF. We share first a USASOC article written by Christopher Howard, which brings us from formation to current USAJFKSWCS and its mission. I’d like to add that on our A team from 1969-70 we had a 3rd officer, 2LT William Weunsch, who was our civil affairs officer.

Then we present an example of PSYOP accomplishments by way of an article by Cherilyn A. Walley and Michael R. Mullins which appeared in ARSOF’s very first issue of Veritas magazine. They describe some of the efforts during Operation IRAQI FREEDOM and how they helped the mission to succeed.

On July 5th, President Biden awarded four Medals of Honor, one each to an infantry squad leader’s son, a tanker, an airman, and a Green Beret. The exploits of all these brave men, described by Joe Lacdan, is inspiring. Maj John Duffy’s exploits were also covered by a CBS news segment that is informative and very heartening: https://www.youtube.com/watch?v=vo8U2nR91Qw. I also recommend: https://www.army.mil/medalofhonor/duffy/?from=features about his life and service.

And before the back cover pics of our chapter meeting, there are a couple of pages about opportunities to get involved (see ads above), and a final reminder of SFACON 2022.