Letters to the Editor: THE OTHER PSYOPS

Letters to the Editor:

By How Miller
Sentinel Editor

It so happens that we have been getting more letters to the editor. Most of them have been very much appreciated compliments. Thank you all for them. It warms our hearts to see that we are doing something worthwhile. We’ve had some that have brought up individual questions that we often were able to answer.

This month, however, we have received somewhat dueling letters that refer to another kind of “PSYOPS.” Greg Walker mentioned in his article about the incredible Mike Echanis, that he had a small part in the 2009 movie Men Who Stare at Goats, which I personally have not seen yet.

John Alexander, who was involved in the real story the movie is very loosely based on, wrote us an email. John has contributed to the Sentinel in the past, including on this subject in his article “The Army Gets Weird” which appeared the December 2020 Sentinel

“If interested, Mike Echanis played a part in George Clooney’s The Men Who Stare at Goats. He was used as an excuse as the goat killer by a BS artist who fed the story to Jon Ronson who wrote the book. When I challenged him, he wrote back that it was Echanis who had killed the goat… In real life, it was the late Guy Savelli using dim mak at Ft Bragg that actually did kill the goat at the med lab. A really wild story. Many think Clooney played me (but a composite) while Jeff Bridges did play my departed friend, Jim Channon (of First Earth Battalion fame).

“I usually say that Ronson took about 5 percent truth to write the book — and then they made the movie. Later I did talk with Greg Heslov (Clooney’s partner) who knew it was nonsense. That said, some weird shit really did happen.”

We showed this to Greg Walker who replied:

“I appreciate Mr. Alexander’s letter and trust this will clear up some misconceptions…

“In this 2009 interview with the author of the book, Mr. Ronson, he clearly states his 1st hand awareness of Guy Savelli’s claim to have killed the goat.

RAZ: “Were you ever able to witness members of this unit stop a goat’s heart by staring at it?”

Mr. RONSON: “What I did see – I discovered that the main goat starer was a man called Guy Savelli. And I said, is it true that you managed to kill a goat by staring at it? And he said yes.”

“Mike Echanis’ name was tied to the film as were so many other urban myths simply because of the work he was doing on Smoke Bomb Hill and at Little Creek, Virginia in not only martial arts but meditation and pain/bleeding control based on the precepts of Hwa Rang Do.

“Special Forces (and the SEALs) have a long history of exploring holistic and non-clinical options meant to enhance the Green Beret or SEAL’s capabilities. In Search of the Warrior Spirit by Strozzi Heckler describes a formal project conducted at 10th Group along similar lines. It was titled Trojan Horse.

“Otherwise, The Men Who Stare at Goats took great liberties with projects like the First Earth Battalion and its stated mission statement. Today, the U.S. SOF community continues its exploration of holistic options for the care and treatment of its wounded, injured, or ill, to include the amazing work done at the individual Group THOR Centers. Also, meditation and its impact when done properly and consistently, has produced calmer, more focused, and effective SOF operators.

“And Mike Echanis was at the forefront of exploring and demonstrating the “how this works” as well as “why this works”.

“But he taught with a sense of humor, as illustrated in this picture taken during one of three courses taught to the Navy SEALs (SEAL Team 2) at Little Creek / Camp A.P. Hill. Mike introduced meditation and additional “mind control” (which meant learning to control one’s own mind) to the Teams as well as Special Forces.”

“And he enjoyed fussing with any media or photographers who were invited to observe training, as is obvious in the picture (see below). 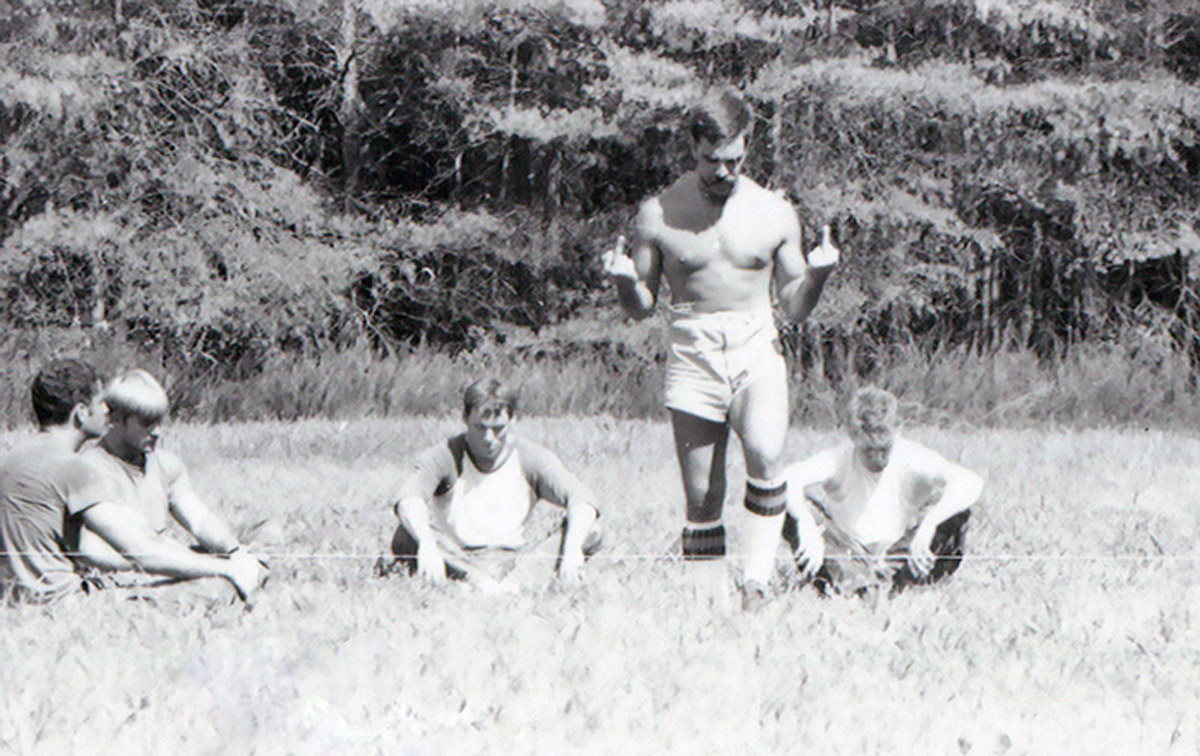 John Alexander is interviewed as a part of this 6 minute YouTube presentation: https://getsmartyplants.com/knowledge/the-true-story-behind-the-men-who-stare-at-goats/.

Please keep those “cards and letters” coming in.