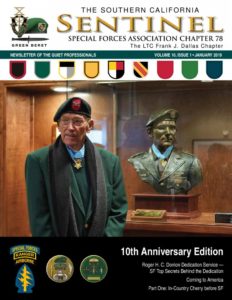 COVER PHOTO : Retired Army Col. Roger H.C. Donlon poses next to his life-size bronze bust, draped with a special Medal of Honor presented to the Special Forces officer in 1964. The bust was part of the formal dedication and naming of the 7th Special Forces Grp. (Abn) Headquarters on Eglin Air Force Base, Fl, on December 5, 2019, exactly 54 to the day, that President Johnson awarded him the first MOH to a Green Beret during the Vietnam War. (U.S. Army photo by Sgt. Sean Hall)