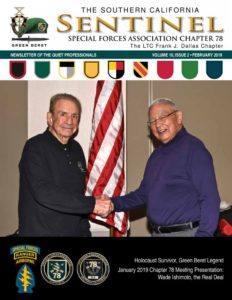 COVER PHOTO : Richard Simonian, an original member of the 10th SF Group, and Wade Ishimoto, a founding member of SFOD-D, who was the guest speaker at Chapter 78’s January meeting. He gave a riveting presentation on Operation Eagle Claw as a member of Delta Force to rescue the 52 American hostages in Iran. (Photo by Lonny Holmes)