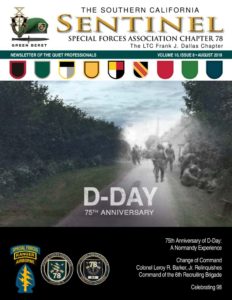 On the cover:
A road winds between ancient and virtually impenetrable Norman hedgerows where the 82nd paratroopers fought in the days following D-Day 75 years ago. Jack William’s story beginning on page 4 of this issue describes his experience at the celebration of the anniversary of D-Day in Normandy.