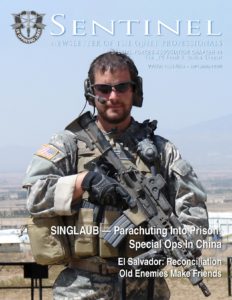 On the cover:
Medal of Honor recipient Staff Sgt. Ronald J. Shurer poses with his weapon in Gardez, Afghanistan, August 2006. As an Army medic, he was credited with saving the lives of his teammates during a 2008 battle in Afghanistan. Shurer lost his fight with cancer at the age of 41 on May 14, 2020. (U.S. Army)