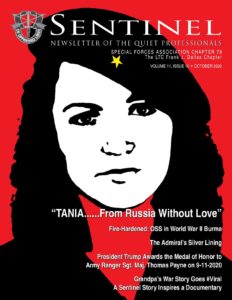 On the cover:
Tamara Bunke, aka Tania, whose story by J. David Truby appears on page 8 of this issue.

The documentary “Grandpa’s War Story Goes #Viral” was broadcasted nationwide in November, 2020. If you missed seeing it, you can view it at https://wwiifoundation.org/lesson/grandpas-war-story-goes-viral/