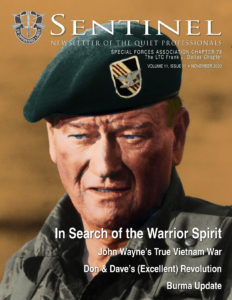 On the cover:
Publicity photo of the The Duke as Col Mike Kirby, who was based on the real life persona of SF Capt Larry Thorne (nee Lauri Torni, a Finn who fought both Germany and Russia in WWII, immigrated to the U.S. in the late ’40s and joined the U.S. Army). (Warner Brothers)