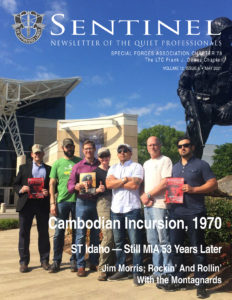 On the cover:
Who reads the Sentinel? War reporter and SFA National Lifetime Honorary member Alex Quade reunites with former team members of a legendary 7SFG ODA, at the Airborne & Spec Ops Museum in Fayetteville, NC, to honor those KIA on an op in Afghanistan they were all on. (Photo courtesy Alex Quade)