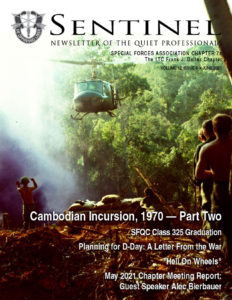 On the cover:
On the cover:
A U.S. Army Bell UH-1D Huey helicopter prepares for a resupply mission for Company B, 1st Battalion, 8th Infantry Regiment, 4th Infantry Division, during the operation “MacArthur” conducted 35 km southwest of Dak To, South Vietnam, between 10 and 16 December 1967. This is similar to the activity experienced by the 4th ID during the Cambodian invasion. (U.S. Army photo)