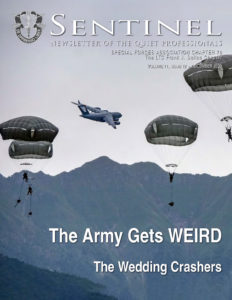 In this issue:
The Army Gets WEIRD
The Wedding Crashers

On the cover: A C-17 from the Hawaii National Guard banks right by the Dolomite Mountains as paratroopers from the 173rd Airborne Brigade parachute onto Juliet Drop Zone in northern Italy. (U.S. Air National Guard photo by Senior Airman John Linzmeier)