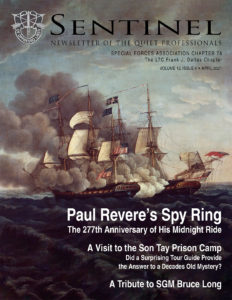 In this issue:
Paul Revere’s Spy Ring – The 277th Anniversary of His Midnight Ride
A Visit to the Son Tay Prison Camp – Did a Surprising Tour Guide Provide the Answer to a Decades Old Mystery?
A Tribute to SGM Bruce Long

On the cover:
The USS Constitution in action. According to Patrick Leehey, “Paul Revere provided most of the bolts, spikes, nails, pins and other ship fittings for the USS Constitution when it was built in the 1790s. He also provided copper sheeting for the outside of the hull when the ship was re-coppered in the early 1800s. When the vessel was built, English copper sheets were used. The copper sheeting was used to pre-vent shipworms from boring into the sides of ships, a highly annoying nautical problem at the time.” (Painting by U.S. artist Michel Felice Cornè in the collections of the U.S. Naval Academy Museum, transferred from the Navy Department in 1869. Official U.S. Navy photograph)