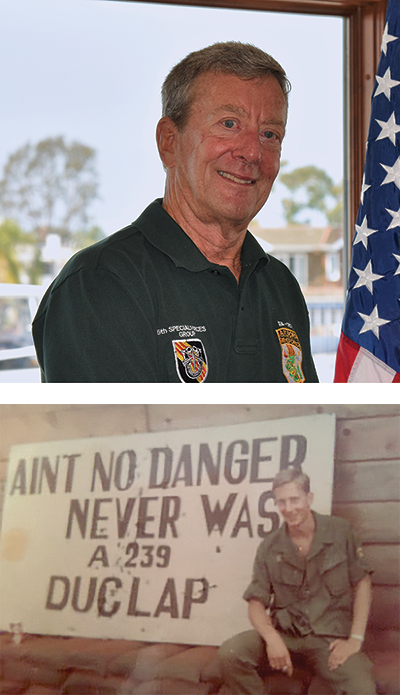 Thomas W. (Tom) Turney was born and raised in Southern California. He attended a military high school after having issues in public school, and after graduating he spent one semester in college and decided school was not where he wanted to be at the time. In 1965 he joined the Merchant Marine and served as an ordinary seaman on an oil tanker traveling to and from Alaska transporting crude oil to refineries along the West Coast.

In 1966 he enlisted in the Army to serve in the Army Security Agency (ASA). He was trained as a Morse code interceptor. When he learned that ASA had a special unit which was part of Special Forces, he volunteered. Upon completion of his training, he was assigned to the 401st Special Operations Detachment, 8th Special Forces Group at Ft. Gulick in Panama. While serving in Panama he underwent additional training including SCUBA School (Honor Graduate), Air Force Survival School and was crossed trained in demolitions. He served on MTTs to Columbia to train the Columbian Navy in communications and to the Darien Province of Panama north of the border with Columbia.

Mr. Turney volunteered to go to Vietnam in 1968 and was assigned to the 403rd Special Operations Detachment, 5thSpecial Forces Group. After completing training orientation in Nha Trang he was assigned to A-239 at Duc Lap to help the camp rebuild after the siege in August 1968.

He was then transferred to Detachment B-24 in Kontum and rotated back and forth between B-24 and A-242 at Dak Pek, the most northerly Special Forces camp in II Corp not far from the Laotian border. In late 1968 he joined B-20 Mike Force and spend the next several months on various Mike Force operations serving under Captain David Moley. In the words of Captain Moley:

“B-20 Mobile Strike Force was a Special Operations Unit based in Pleiku. B-20 Mike Force was led by US Army Special Forces troops along with Australian Special Air Service (SAS) personnel and Australian Commandos who organized and trained Montagnard soldiers into a quick reaction force. Unlike MACV-SOG teams that would go into enemy territory to gather intelligence and work undetected, the Mike Force would go looking for trouble whether that was helping a Special Forces Camp that was being attacked or going into areas that were “unfriendly”. Mike Force soldiers were all volunteers and Sgt. Turney was a distinguished member of the 233 Mike Force Company which I commanded. B-20 Mike Force performed multiple missions in the II Corp area of South Vietnam. The area comprised over 40% of the land mass of South Vietnam and was heavily occupied by the North Vietnamese Army Regulars (NVA) who were concentrated in locations called sanctuaries. One of the most fortified of these was the Buon Mi Ga, Ban Mega/Happy Valley Complex and in early 1969, B-20 Mike Force was tasked with entering this sanctuary with the goal of engaging the NVA. In the ensuing operation there were over twelve fire fights and in each, Sgt. Turney fought with extraordinary bravery and inspired the troops around him. He was a gifted leader and an exceptional Special Forces soldier.”

In 2016, Mr. Turney returned to Vietnam for the first time since the Vietnam War and visited the locations of the former Special Forces camps between Kontum and Dak Pek including Ben Het, Dak To and Dak Seang and Dak Pek. During this trip he visited with several former Montagnard CIDG soldiers in the area and wrote an article for The Drop, the publication of the Special Forces Association. He was appalled by the way the Montagnards who were such great allies during the war, had been treated by the Vietnamese communists after the US withdrawal and this treatment continues today. After his visit he worked with other former Special Forces II Corp. Mike Force associates and to date these efforts have raised approximately $60,000 to support the work of The Vietnam Fund. He has written several articles for the Chapter 78 newsletter, the Sentinel, in a column called “The Forgotten Warriors”, highlighting the plight of the Montagnards who remained in Vietnam after the War.