As a businessman for most of my adult life, I can honestly say that a large part of my business knowledge/savvy came from the lessons I learned while serving with the United Stated Army Special Forces, more commonly known as the, “Green Berets”. 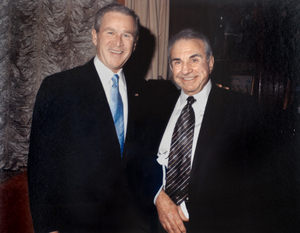 I’ve learned a lot through trial and error, successes and failures. However, it was my Special Forces experience that carried me through the tough times. It was there that I learned to persevere, take calculated risks, discover my limitations, take direct action, sacrifice to accomplish my goals, find the courage to keep moving forward, and create highly loyal management teams.

Unconventional warfare can best describe my experiences, not only as a Green Beret, but also my lengthy career in the world of business. While many individuals learned their business skills from attending schools or spending countless hours in libraries researching books. I on the other hand, along with hours of research, attended the business school of hard knocks. Again, trial and error, success and failures were amongst my instructors.

My earliest lessons began, as a young teen, with my father. He owned a small business collecting rubbish from homes and businesses off the streets in East Los Angeles. I would ride in the back of his truck sorting the trash items to be taken to the local dumpsites, where he would sell the items for a profit. I made mental notes on how my father handled his business transactions.

However, while gowning up in a tough East Los Angeles neighborhood, I like other teens of that time, began to “hang around” the wrong crowd. That youthful indiscretion cost me time in the county jail. I was also expelled from my high school just before graduation. It was at this time of my life I decided to join the Army.

The Korean War was in full swing, and the Army granted me enlistment, despite my arrest. Joining the Army was the beginning of an intense program, which would help to shape my life.

My military training began at Fort Ord, California, for basic training. While in basic training I learned of a secret unit the United State Army was forming, the First Special Forces, I volunteered. But first I had to volunteer for Airborne Training, and if I graduated from there, only then could I begin my training with the Special Forces unit, which was conducted at Fort Bragg, North Carolina. During my years of Special Forces training I learned how to persevere, to never give up, even in the most grueling situations, to keep moving forward as if my life depended on it, and in some cases it did. After graduating from Special Forces training I was assigned to the 10th Special Forces Group, and was sent to the town of Bad Tolz, Germany where we conducted several training operation missions. This was at the height of the cold war; it was also the time of my life, that I became a man.

My years in the service taught me some very valuable life lessons. Lessons such as taking risk are a part of life. Jumping out of a perfectly good airplane, taught me that. Also that courage/bravely is not absents of fear, but how one handles their fear, in any given situation, is what makes them courageous. There was many times, in the business world, that it would have been easy to throw up my arms and just quit. However the Army taught me the valuable lesson of perseverance and a never quit attitude.

There were two specific instances in my life, which I recall that the control of fear proved to be a very valuable lesson, both were a life changing experience. Once an employee of the company held a gun to my chest over a dispute involving money. Instead of panicking, I defused the situation by calmly talking to the individual. Once again, another person pointed a gun at me, disgruntled over him being discharged from the company, and again I handled the situation, not without fear, but without panic. Being in the business world and a combat zone does have its similarities.

However, there was a time in my life where those and other life lessons that I had learned took a back seat to my pride. I felt independent of others, and began a personal crusade grabbing personal credit for all of my businesses successes. As a result of my piety, I made foolish business decisions and wasted millions of dollars.

In 1967 I was the CEO of a mobile home park development company and riding the wave of success and foolish pride. Giving full credit to myself. It was at this period of my life I learn the different of healthy and unhealthy pride.
A friend, Harry Skinner, introduced me to his friend, Ken Poure. Ken in turn introduced to our Lord Jesus Christ. My wife and I became followers of Jesus Christ and we received the gift of eternal life and the forgiveness of sins, which for me included the sin of pride.

By reading and studying the Bible, I learned that Jesus Christ’s life on earth had many special qualities, which I have come to admire. One such quality that I observed while in Special Forces was courage. Jesus was courageous, knowing that crucifixion was eminent; he focused on his mission here on earth and faced death willingly.

Jesus Christ was a leader; he knew how to develop individual’s weaknesses into strengths, forming a team of loyal strong men who kept his teachings alive up to the present day.

Christ has redirected my life to include his work in the marketplace through the Christian Business Men’s Connection, (CBMC). With CBMC I have been involved in many general and limited partnerships. I have built over 100 mobile home parks, financed 75 mobile home parks and raised private funds to help purchase them.

I am presently the CEO of Santiago Communities, Inc. Christ has entrusted me with hundreds of employees, and the oversight of 40 communities were 5,500 families live in various locations in the western part of the United States. My business life is full, yet I have with many challenges ahead of me. As I go into the future, I will always remember, and relay on the lessons learned from Jesus Christ, my Commander in Chief, and my training in Special Forces.