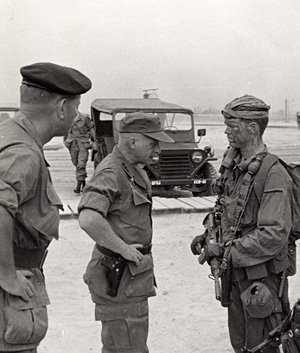 Born in 1946, John Stryker Meyer entered the Army on 1 December 1966. He completed basic training at Ft. Dix, New Jersey, advanced infantry training at Ft. Gordon, Georgia, jump school at Ft. Benning, Georgia, and graduated from the Special Forces Qualification Course in December 1967. After a 12-week training session in Ft. Gordon, on radio teletype, Meyer landed in South Vietnam in April 1968, and arrived at FOB 1 in Phu Bai in May 1968, where he joined Spike Team Idaho.

When FOB 1 was closed in January 1969, ST Idaho was helicoptered to FOB 4 in Da Nang, which became designated Command and Control North, CCN. He remained on ST Idaho through the end of his tour of duty in late April. Returned to the U.S. and was assigned to E Company in the 10th Special Forces Group at Ft. Devens, Massachusetts until October 1969, when he rejoined ST Idaho at CCN.

That tour of duty ended suddenly in April 1970 after the CCN commander refused Meyer’s first request to pull his four-man team from an A Shau Valley target. He returned to the States, completed his college education at Trenton State College, where he was editor of the school newspaper, The Signal, for two years, worked at the Trenton Times for 10 years, eight years at the San Diego Union and 15 years at the North County Times in Oceanside, California.

Meyer received his 20-year membership pin from the Special Operations Association in 2002. In February 2011, Meyer was an associate director in the veterans department at Interfaith Community Services, a non-profit organization that maintained 170 beds for homeless veterans. He and his wife Anna have five children and live in Oceanside, Ca.

Meyer was the President of Chapter 78 from 2018-2019. He is also a Life Member and Past President of the Special Operation’s Association and a member of the Military Order of the Purple Heart. Meyer’s has memberships in the following: VFW, American Legion, United Veterans Council and is Co-Chairman of One VA-CAB in San Diego.