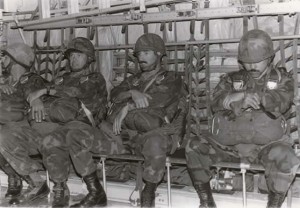 University of Pepperdine Malibu where he obtained a Master’s in Planning and Public administration. SGM Long also has a Bachelor of Arts Degree in Criminal Justice. These Degrees were obtained while employed with the Westminster Police Department for nearly ten years. His assignments were Patrol, Detectives and SWAT.

LIFE WITHOUT RISK IS NO LIFE AT ALL

I now know why men who have been to war yearn to reunite. Not to tell
stories or look at old pictures. Not to laugh or weep. Comrades gather because
they long to be with the men who once acted at their best; men who suffered
and sacrificed, who suffered and stripped of their humanity.
I did not pick these men. They were delivered by fate and the military. But
I know them in a way I know no other men. I have never given anyone such
trust. They were willing to guard something more precious than my life. They
would have carried my reputation, the memory of me. It was part of the bargain we
all made, the reason we were so willing to die for one another. As long as I
have memory, I will think of them all, every day. I am sure that when I
leave this world, my last thought will be of my family and my comrades…
Such good men.

Former Marine Michael Norman from his book, These Good Men