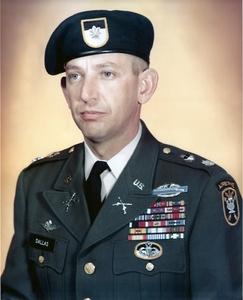 Born on November 25, 1924 at Mount Carmel, Pennsylvania. His father was a coal miner and he was the oldest of six children. Early in life, he developed a passion for the outdoors and hunting and fishing and as a young man helped provide food for his family during the years of the Great Depression.

While still in high school, LTC Dallas enlisted in the Army during World War II. He served with the 517th Regimental Combat Team (RCT) in Italy, France, Belgium and Germany. During this time, he made a combat jump into southern France and was awarded both the Silver Star and Bronze Star for valor.

After the war and a short break in service, LTC Dallas served in both the 82nd Airborne Division and the 11th Airborne Division. He then went to Officer Candidate School (OCS) and commanded a mortar platoon company in the 1st Cavalry Division during the Korean War.

As a Captain, he completed Special Forces training at Fort Bragg and helped organized the 77th Special Forces (SF) Group, one of the earliest SF units. After an assignment with the 10th SF Group in Germany, he was reassigned to the Special Warfare School at Fort Bragg as the Director of Logistics. His other overseas assignments included training Korean Special forces units in Korea and commanding Special Forces B and C Detachments during the Vietnam War.

In the IV Corps district at Can Tho in the Mekong Delta of South Vietnam, his unit (often called Dallas’ ‘Navy’) successfully integrated three Navy hover boats and nearly 30 airboats into regular Special Forces tactical operations including developing specialized boat gun mounts and floating helicopter landing pads. LTC Dallas retired from the Army at Fort Bragg on July 1, 1970 after 26 years of devoted service. After retiring from the Army, he worked as a draftsman and project designer for the Fayetteville NC City Engineer. He also enjoyed more time for his lifelong passions for hunting, fishing, woodworking and square dancing.

As one of the early Special Forces soldiers, LTC Dallas was the chairperson of the committee that approved the design and purchase of the first Green Berets and the first SF unit shoulder patch. He was an original member of the SF Decade Club (predecessor to the SF Association) and was, in fact, the first club president. He holds the first membership card issued (#D-1) in the history of the organization. He also helped design the statue of the Special Forces soldier that still stands in front of the JFK Special Warfare Center at Fort Bragg.

LTC Dallas and his wife of 65 years, Josephine (Jo) Dallas have three children and eight grandchildren. All of their children are also associated with the Army; Lieutenant Colonel retired Edward Dallas and wife Mary Jo, Nancy Dallas Boatner and her husband Colonel retired Jim Boatner, and Lieutenant General Patricia Dallas Horoho and her husband Colonel retired Ray Horoho. LTG Horoho is an Army nurse and is currently serving as the 43rd Surgeon General of the Army, the senior medical soldier on active duty.

Today LTC Dallas lives in Clifton, Virginia and remains an active member of the Clifton Lions Club and the Saint Andrew the Apostle Catholic Church.

FORT BRAGG, N.C. (Army News Service, June 30, 1998) — The airborne staff sergeant’s view from the French cliff would have been extraordinarily beautiful under different circumstances. The Siagne River framed the scene from below as a clear-blue autumn sky languidly lounged above.

As the American soldier continued his climb up the cliff, a sudden explosion of mortars and gunfire provided by a group of German Army soldiers located above served to spoil this peaceful picture.

For his daring ascent up the cliff and ensuing successful assault on a German position during World War II, long-retired Lt. Col. Frank Dallas at last received the Silver Star, June 22, during a ceremony at the U.S. Army Special Operations Command’s Heritage Auditorium here.

[the cliff],” the former Special Forces officer explained. “I was 18 [years old] and just did it … I do know I didn’t want to get spotted.”

The one-man assault began the afternoon of Sept. 27, 1944, after Dallas’ company of 517th Parachute Infantry Regiment soldiers had crossed the Siagne River. The Germans lay in front of them atop a 35-foot cliff, guarding the town of St. Cezaire. A 50-yard-long, open field separated the Americans from the cliff.

“We suffered quite a few casualties,” Dallas said. “We were pinned down with machine gun fire and mortars. Fortunately, a lot of the mortars were duds or we would really have had casualties.”

Suddenly, Dallas got up and sprinted across the open field.

“Guys were dying around me. I had to do something,” he explained.

Upon reaching the cliff’s base, he began climbing. The cliff was indented with large crevices and plateaus, which made Dallas’ climb easier. Before long, Dallas found himself behind the Germans.

“I just started eliminating the Germans one by one,” Dallas said. “After the fifth one, six more came after me.

“They kept spraying with automatic weapons, but I just kept running around to different spots, popping up and shooting.”

After Dallas took out the German mortars, his company joined in the assault and drove the Germans off the cliff and out of St. Cezaire.

“He killed most of the Germans himself,” said retired Command Sgt. Maj. Walter Ammermon, who was with Dallas at St. Cezaire and throughout the war. “He made it a lot easier for the rest of us to take the hill.”

“This [medal] means the world to me,” Dallas, a Fayetteville native, said. “I know I earned it and I waited a long time. I only wish I could have worn it all this time.”

The delay mostly involved lost paperwork and attrition, according to Dallas. Within two months of the St. Cezaire assault, Dallas’ platoon leader and company commander, among others, were killed.

It wasn’t until 1997 that the individual who recommended Dallas for an award in 1944 realized he hadn’t received it and started the process again.

Dallas was born Nov. 25, 1924, in Mt. Carmel, Pa. to a coal-mining father and a loving mother, he said. He was the oldest of six brothers and sisters. In overcoming almost insurmountable odds against the Germans, Dallas credited his hardy childhood and a knack with a rifle.

“I have all good memories. We did a lot together,” he said. “We kids all went to a country school and loved the outdoors.”

Dallas said he took up hunting at an early age, which helped him become an expert with rifles. When he shot, he said, he rarely missed.

“I loved to hunt and fish. We had a hunting lodge in the valley and went there all the time,” the 73-year-old said. “In fact, hunting was how we got our food during the Great Depression.”

Growing up, Dallas knew he wanted to be a soldier.

“When I was young, I always used to look up to people who wore the uniforms,” he said. “I always liked the military. After World War II broke out, I left high school and joined the service.”

From the beginning, Dallas knew he had made a good decision.

“I loved it,” said Dallas, who also earned a Bronze Star for valor exactly three months after St. Cezaire.

On Dec. 27, 1944, Dallas’ company went on the offensive to liberate the small town of Manhay, Belgium. During the attack, his platoon leader, platoon sergeant and seven others were killed.

Dallas rallied his platoon and continued the assault. Upon encountering a German tank, he disabled it with his M-1 rifle and set the open hatch on fire with a phosphorous grenade.

About an hour later, Dallas and his men finished clearing the Germans from the town.

“You always knew Frank would be there,” said Ammermon. “He was special — everyone recognized him as a good combat man.”

It was during a break from the Army after the war – to please his mother – that Dallas said he first saw his future wife, Josephine, to whom he’s been married for 51 years.

“I went roller skating and met my wife,” the former John F. Kennedy Special Warfare Center and School instructor said. “I told her, ‘You can marry me, but I’m going back into the service.’”

And he did, participating in both the Korean and Vietnam conflicts. Altogether, Dallas fought in 17 combat campaigns during three wars.

In 1970, after 26 years in the Army, Dallas retired. In addition to his Silver and Bronze stars, he earned two Legion of Merits, three Air Medals, three Purple Hearts, the French Croix-du-Guerre, a Meritorious Service Medal and the Army Commendation Medal.

Although he has been recognized for numerous wartime exploits, Dallas said he never felt like a hero.

“It was just something I had to do … I guess you could say it was for adventure,” Dallas said. He also earned the Combat Infantry Badge; the Master Parachute and Glider badges; French, Korean and Vietnamese Parachute badges; and the Special Forces Tab.

To his two daughters and son, Dallas did more than his duty.

“My father’s a hero of this nation, he’s a hero to me personally, he’s a hero to the family,” said Dallas’s son, retired Lt. Col. Edward Dallas. “He represents the qualities of patriotism and duty to his family and his country.”

Perhaps in response to their father’s example, each of the Silver Star winner’s children is tied to the military in some way. Dallas’ oldest daughter is married to an Army major working in the Pentagon and his youngest daughter is a lieutenant colonel serving at Fort Gordon, Ga.

Nowadays, Dallas’ hands might shake a little and his eyesight might not be as acute as it was when he was on active duty, but the old soldier still provides inspiration.

“I wouldn’t mind serving with him anytime, anywhere,” said Ammermon. “There’s no one I’d rather have on my right or left.”