There were many memorable events over 21 years of active duty service in Armored, Infantry and Airborne Divisions  as well as Special Operations units with two Cold War tours in Germany and two tours in Vietnam. Some Highlights:

My most memorial ones were in 1968 while assigned to 5th Special Forces Group with duty at Forward Operating Base-3 (FOB-3), Command and Control North, MACVSOG, Khe Sanh Combat Base, Vietnam during the Siege of Khe Sanh. The base was surrounded by 20,000 North Vietnamese Regulars and shelled every day and night for extended periods. I am proud to be one of the very few Army officers privileged to wear a Navy Presidential Unit Citation ribbon for combat association with the 26th Marine Regiment.

My two Cold War tours in Germany in Mechanized Infantry Battalions were most interesting. Our mission was to protect the West German border with two hours notice to assemble all personnel and equipment and head for the Czechoslovakian border to defend against possible invasion.

Probably my most enjoyable Army assignment was as a Department Chairman at Culver Military Academy in Indiana. Culver is a prestigious college preparatory High School with 800 Cadets organized into Band, Infantry, Artillery and Cavalry units. Each Spring and Fall, there were full dress parades every Sunday after church – including 18 Army vehicles, 6 howitzers and 150 horses. My Department instructed the Cadets in JROTC training for all four years of school.

In 1971, I was sent TDY to Ft. Benning, GA as a Ranger School Tactical / Evaluation Officer for a nine-week pilot program to train ROTC college juniors as Rangers rather than sending them through the regular six-week ROTC summer camp. I essentially went through Ranger School for a second time while accompanying and evaluating the students.

In 1972, I commanded a compound on the periphery of Da Nang, Vietnam, responsible for its operation, defense and eventual stand down as troops were withdrawn from Vietnam.

My last assignment before retiring was as the Chief of the Infantry Branch Advisory Team for Readiness Group Los Angeles (RGLA). RGLA was comprised of active duty personnel from all branches of the Army and stationed at Los Alamitos Joint Forces Training Base. The unit’s mission was to advise and assist in the training of the 40th Infantry Division, CA National Guard as well various local Reserve units. I was also privileged to be an advisor to Special Forces Company A for a short period. 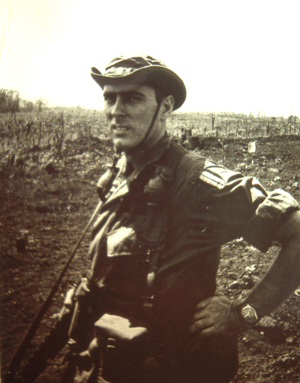