As part of a very busy visit to Fort Bragg, scheduled to be re-named Fort Liberty, A325 Duc Hue teammates, Lew Chapman and I, had the distinct pleasure of perusing the John F. Kennedy Special Warfare (JFKSW) Museum.

After a closure, it was reborn in April of 2021 in a newly revamped building, about a block from the old location. It is open to the public, and it is not very difficult to get on base to see it. Chapter 78 member Jim Duffy visited in May, 2022 and took a lot of pictures, many of which we showed in Sentinel June 2022 issue.

After we saw most of the exhibits, it was time for our scheduled meeting with the Museum Director, Roxanne Merritt. She has been caring for the museum, and the Green Berets whom it so eloquently honors, for forty years. Not only is she a fount of knowledge, she is clearly the glue that binds this treasure together along with her three employees.

She has personally interacted with a great many of the SF and Special Ops legends, as well as one-tour Green Berets such as Lew and I, SF families, and the general public. She has many tales she can share, and many I’m sure she can’t. When I mentioned to her how valuable she is to the Regiment, she deferred, saying that it was you who talked to your congressmen and others who saved the museum. After the closure was announced she began to be very busy interfacing with many of them. Eventually SF and others came to the rescue. 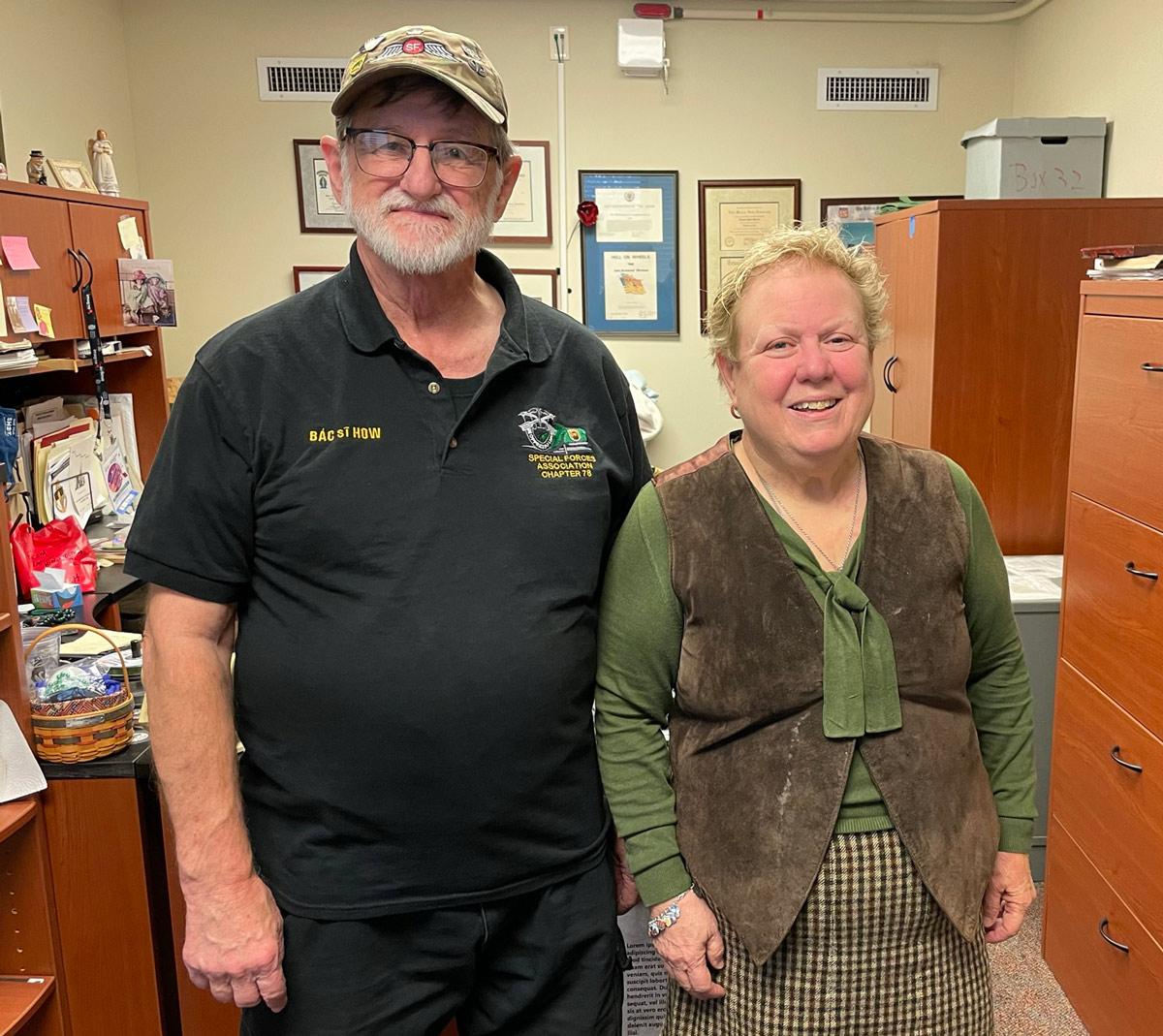 The glass-cased displays run the gamut from the SF precursors — Devil’s Brigade, OSS, and Philippine Scouts in WWII, through the founding days of SF and PSYOPS in 1952 as a permanent part of the army, Laos and Vietnam, Central and South America, and Africa, to Iraq and Afghanistan.

Each display tells a story, replete with actual artifacts from the events, from Sten Guns used extensively by the OSS, to anti-tank Javelins used from Iraq to Ukraine, and even some spears. There are some gold plated weapons “donated” by Sadaam Hussein’s son Uday, along with a toppled statue of Sadaam. One of my favorites is a mockup of Nick Rowe’s V.C. captivity, before he escaped and eventually founded the SERE school. Its realism includes a life size “Nick Rowe” shackled in a bamboo cage in the jungle, and a sound track with jungle sounds and distant gunfire. It is extremely easy for a Vietnam Vet to become immersed.

The displays are as far ranging as is the SF experience. There is working with the indigenous personnel around the world, such as the Montagnards and Afghans, and surprises like the OSS working with Ho Chi Minh. You’ll find “Barbara,” the actual model used to plan the Son Tay Raid, and even a revealing display about the Q-course’s culminating event: Gobbler Woods, later revamped and renamed Robin Sage. 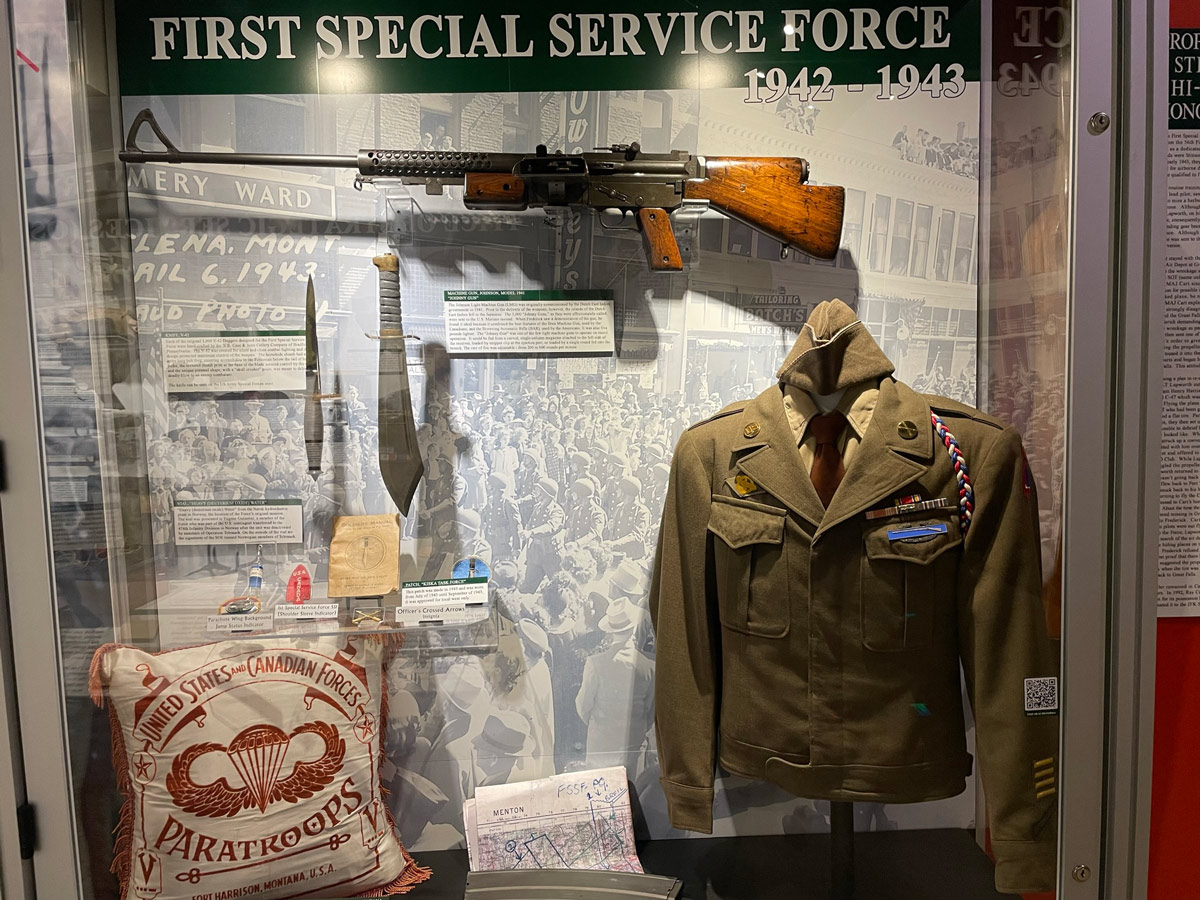 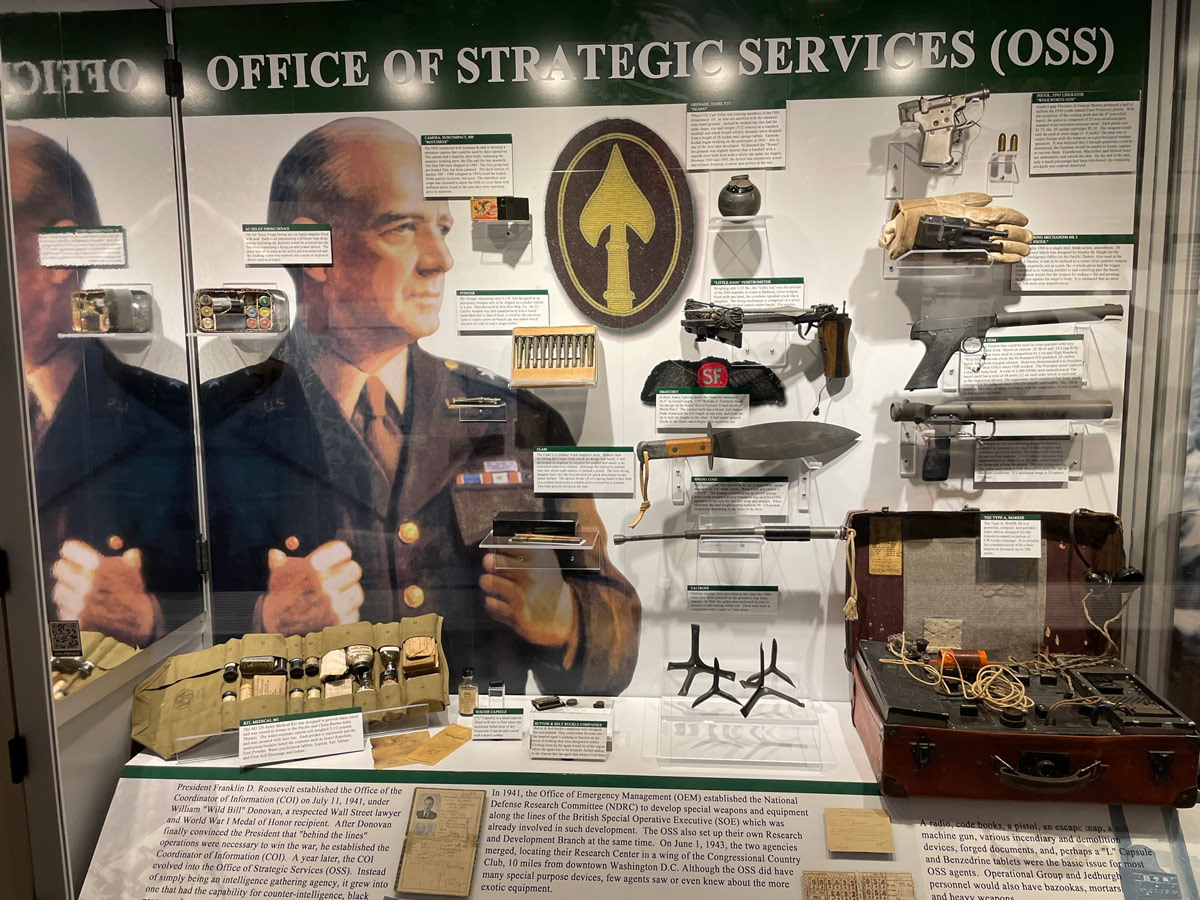 The OSS example was directly used to formulate Special Forces, working hand in hand with PSYOPS. 1960’s Gobbler woods, reborn as Robin Sage is the final stage of Q-course training, involving many local citizens in the scenarios. 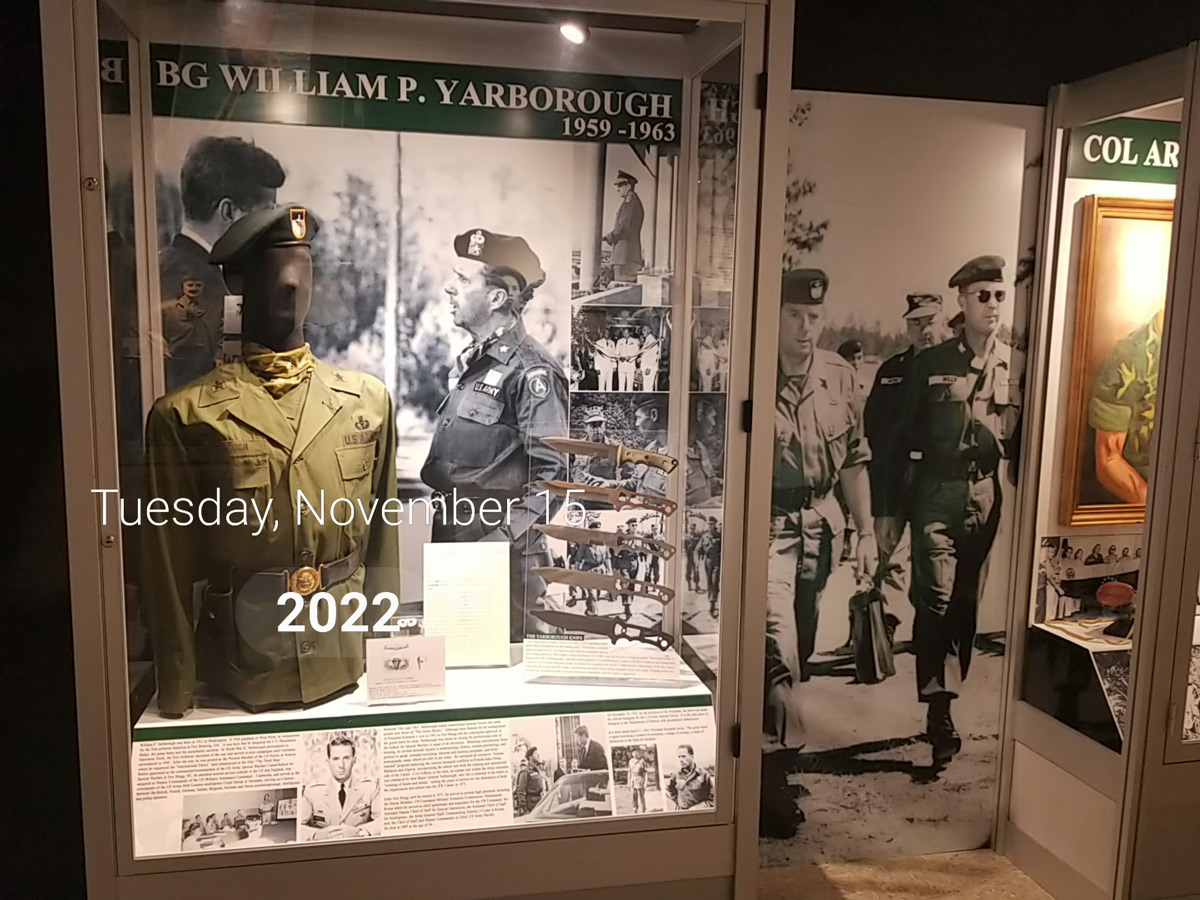 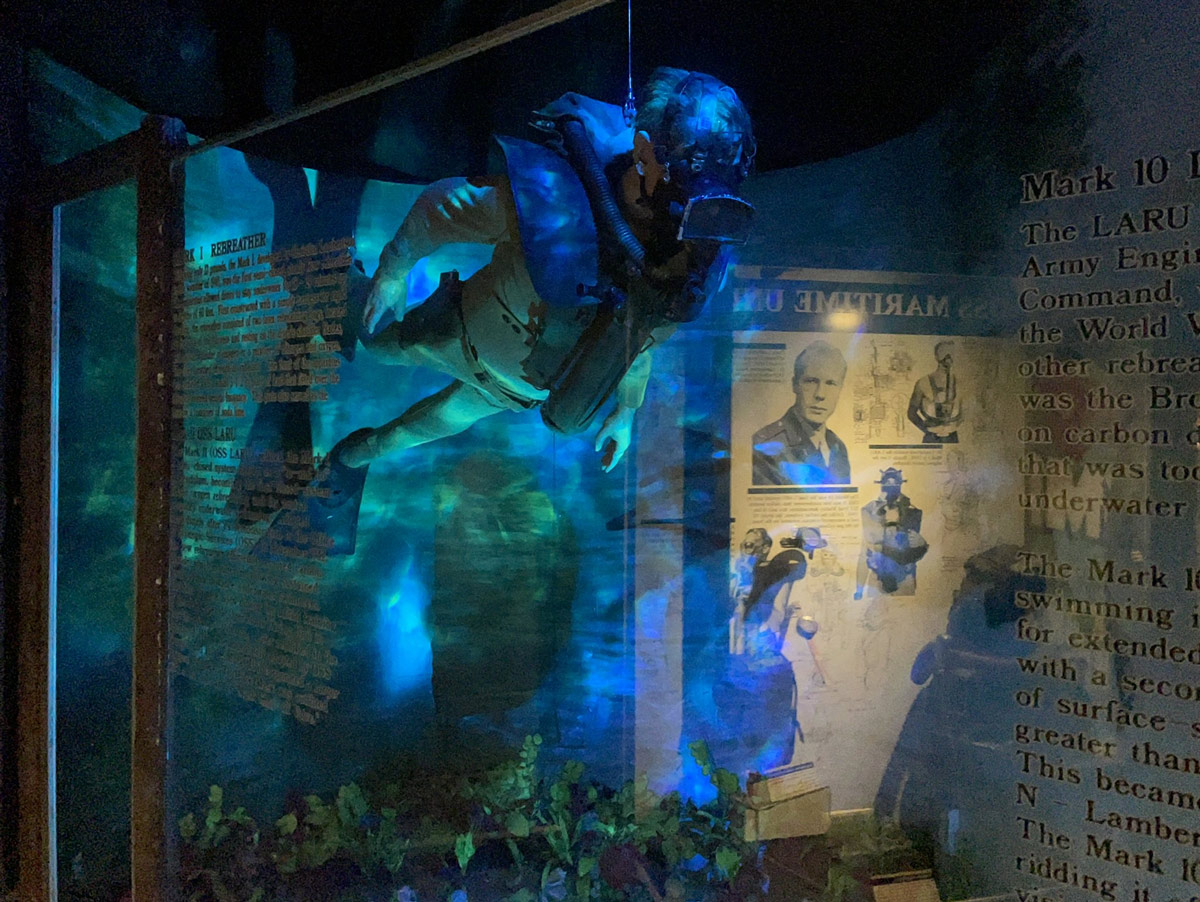 An early version of a rebreather which allowed for stealthy underwater access to the enemy. Roxanne gave us a personal behind-the-scenes tour. She showed us the poster printer they have and other tools of the trade, along with progress in a new 1500 square foot section they are expanding into. The attendance for the museum is recovering nicely, already higher by far than last year.

Besides giving us details that were not obvious about several of the displays, such as the mascot Malayan sun bear, Barney, another orphan covertly adopted by SF, and ultimately the museum. She took us into the Martha [Colonel Maggie] Raye conference room. All four walls are filled with Martha Raye memorabilia, much from her estate. Col Maggie has the unique honor of being buried at Ft. Bragg, partly from her diligence in visiting every A-site in Vietnam and taking Polaroid shots with each member of the team. The Polaroids were given to the team member along with a St. Christopher medal. I still have those that she gave me. I don’t know any Green Beret whose eyes don’t light up when they talk about a visit by Col Maggie to their camp. She loved the Green Berets and we loved her. One of the several books about her was written by Noonie Fortin, Memories of Maggie: Martha Raye — A Legend Spanning Three Wars.

As for the future, they will continue to create meaningful and informative displays and interact with the public and the Regiment. There are many ways for you follow them from afar, as well as their proximity to Interstate 295, making a drop-by visit while travelling is a treat to look forward to.

How do you find out more about the JFKSW Museum?

Roxanne says the best way is to visit one of the following:

She says that since they are one of the few private museums, they are dependent upon donations. You can find ways on the museum’s website to donate artifacts and keep the museum alive for future generations. Monetary donations are accepted at the Special Warfare Museum Foundation website.

Would you like a printed copy of the Sentinel? Visit the museum, because they are now available there. If you don’t see one, ask. The Sentinel, Veritas, and other items are displayed on the wall racks between the Vietnam and WWII displays near the rest rooms. The plan is that they will be available in the gift shop, when it reopens.

Lew and I also visited the Army Airborne and Special Operations Museum in Fayetteville. It is impressive in its own way, and duplicates some of the topics covered in the JFKSW Museum. It is a big, fancy museum that caters to the public as well as veterans’ families, and covers the Airborne experience more broadly with interesting and well-crafted displays. If you have the time, you should visit both. But if you don’t, chose the JFKSW Museum. If you want to recall, or learn more about your roots and others who share the Brotherhood in a more intimate setting, choose the “Special Forces” museum at 3004 Ardennes Street, Fort Bragg, NC.