Investigating the Son Tay Raid — The Devil is in the Details

Investigating the Son Tay Raid —
The Devil is in the Details

As historians, authors, and writers we seek input from many sources. We report what we can verify or what appears, with supporting documentation, interviews, and photos is most credible. The Son Tay Raid is no exception to this constant search for accuracy.

Carroll V. Glines, USAF, authored a concise history on the raid which was published on Nov. 1, 1995:
https://www.airforcemag.com/article/1195raid/

And there have been a slew of books published in the aftermath of the raid, one of these by John Gargus, who had a front row seat during the planning and execution of Operation Ivory Coast. John was kind enough to send the following to me after reading my own article (published in the February 2022 Sentinel, also reprinted below), noting the revelation of the unauthorized CCN recon of Son Tay was something he had only heard whispered about.

As a result, I have since read John’s book, The Son Tay Raid: American POWs in Vietnam Were Not Forgotten, and I would encourage anyone interested in the raid to do the same. 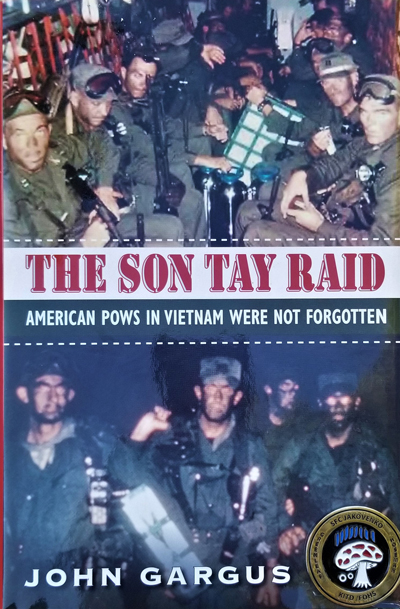 1. Photo of Cherry One shows a newer modification of that C-130.

2. Walter Britton is Warner A. Britton.

3. Banana that crash-landed into the POW courtyard was an HH-3 not HH-53.

4. Simons was not in command of the ground forces. It was LTC Elliott “Bud” Sydnor whom you introduce as a Captain in command of Redwine. The ground command staff was with Sydnor on Apple Two. His call sign was Wildroot. Call sign for Simons was Axle. Redwine was commanded by Captain Dan Turner. Sydnor’s command staff had five people and they shared the same helicopter — Apple Two. Simons with his two ROs was on Greenleaf’s helicopter. Udo Walther commanded the Greenleaf. He was not Bull Simons’ exec. Simons was an add on to Greenleaf and he was Sydnor’s back up. He did issue several commands because Udo was preoccupied clearing the barracks building and was not aware that they were in the wrong place until he came out on the courtyard. Everyone assumes that Simons commanded the ground force. It was Bud Sydnor

5. The quote at the end of the article is incorrect. You are quoting VADM Bardshar who ordered no publicity and destruction of his Task Force’s OPORD. He is quoted as such in Manor’s report. It was not Manor who directed the destruction. Manor is the only one who did not destroy his copy of the Navy’s OPORD for the diversion in the Gulf of Tonkin.

NOTE: To read the article associated with in the February, 2022 issue of the Sentinel. The text has not been altered to address the clarifications/corrections presented previously.