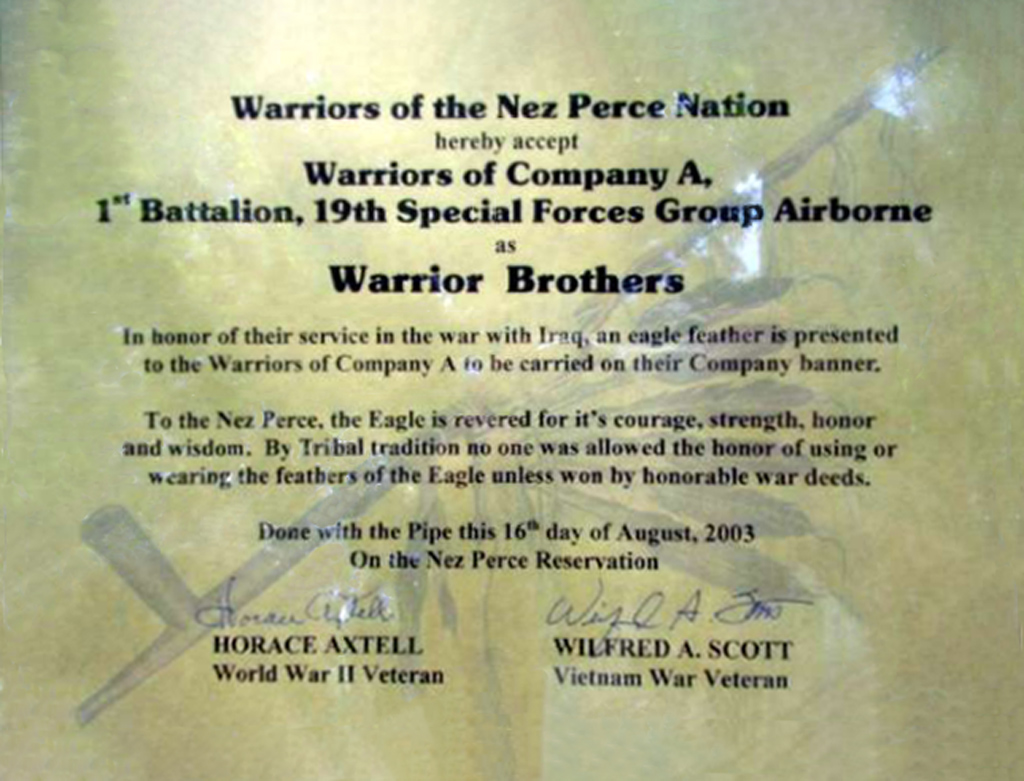 “Each year, Nimiipuu (Nez Perce) people gather in a grassy field at the Fort Vancouver National Historic Site to honor their ancestors who were incarcerated here in 1877-78. The men, women, and chil-dren — led by Chief Red Heart at the time — were treated harshly. Conditions were so bad that a young boy died. More than 120 years later, the Red Heart Memorial began in 1998 and has happened every year until 2020, when it was cancelled because of the coro-navirus pandemic. This year, Nimiipuu members of the Red Heart families gathered once again, this time in a private, socially-distant ceremony that included only Tribal members and representatives from the City of Vancouver and the National Park Service.

“In lieu of a public event, Confluence has partnered with organizers of the ceremony on this Red Heart Memorial Oral History Project to record this year’s event and gather oral history interviews from participants, with support from the National Nez Perce Historic Trail. A recording of the event will air on CVTV and be available at the Confluence Digital Library, where we will also keep the oral history recordings. We have collected the first set of those interviews into a special episode of the Confluence Story Gathering Podcast.”

Welcoming the Black Scarves – August 2003 SPALDING — Under the shade of cottonwood and locust trees rus-tling in a stiff breeze, the men of Company A, an airborne Army Special Forces unit fresh from Iraq, formed a circle with veterans from the Nez Perce Tribe.

Wilfred Scott, vice chairman of the Nez Perce Tribal Executive Committee, an elder and veteran himself, welcomed the 20 young men to Nez Perce Country and described the coming pipe ceremony.

“I do not recall us doing one like this for any group or any unit,” said Scott. “Many of us get pretty emotional doing these ceremonies.”

At that the tribal flag song was played and the Special Forces troops stood straight and rigid as the stars and stripes, tribal flags, an Army flag and the company banner were brought in.

The Nez Perce veterans befriended the unit and honored it with a pipe ceremony prior to the war. They also sent black scarves embroidered with the word Nimiipuu (Nez Perce for “The People”) and the Alpha Company insignia to the men, who wore them in Iraq.

The troops were also welcomed to the ceremony by Anthony Johnson, chairman of the tribe and a veteran of the Gulf War. He spoke of his return from war 10 years ago and how welcome the sight of trees and green grass was after months in the desert.

“We want to say welcome home and job well done,” said Johnson. “We are very glad that in a traditional way we didn’t have to do an empty-saddle ceremony in honor of a fallen comrade.”

Company commander Maj. Gregory Allen, dressed in desert fatigues, accepted the welcome and thanked the veterans for their prayers and blessing.

“This is very overwhelming to me,” he said. “I’m not a very emotional person.”

Allen introduced each of his men and described what their job was during the war. “It is pretty incredible all these guys are back alive and no one was injured. We can thank God for that and we can thank all of our training.”

Spiritual leader Horace Axtell then blessed the ceremony and he and others prepared pipes that circled the group of about 40 men three times. Each man and a few women raised the pipe to the sky and then to their lips to draw in the smoke.

“Now you become part of the Nimiipuu people and we welcome you,” Axtell said.

Following the smoking, gifts were exchanged before an eagle feather was passed around the circle. Each person who held the feather stood and told of their service and some of their experiences.

SFC Gregory Walker, who had formed a friendship through e-mails with Scott, said the tradition of Special Forces was born from the courage and tactics of Indian warriors in the 1700s.

“Your scarves and your prayers with them went over with us and brought us back safe today.” 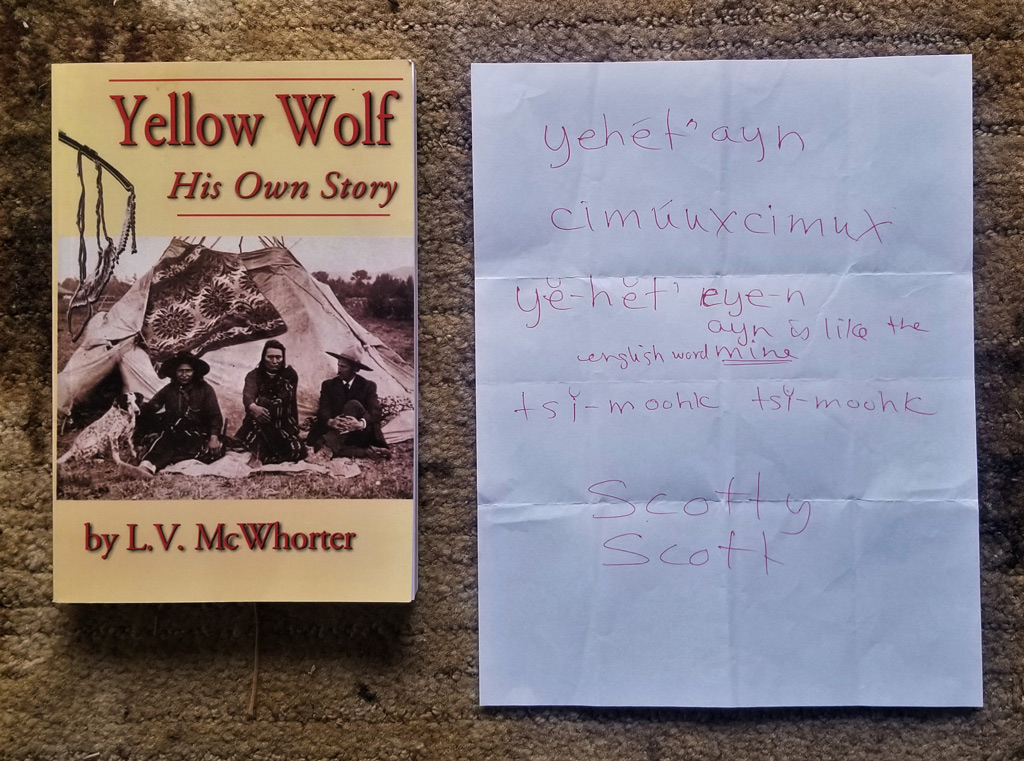 Only a Nez Perce Elder can bestow a tribal name. “Black Scarf” is the name given to the author. (Photo courtesy Greg Walker)

What’s in a name?

“Each name fulfills the purpose of revealing something about the character or temperament of the person or place. Names like these are still in use across America today. Some people receive more than one name, which reflects significant character changes during their lifetime. Legal names are given, but Native American names are earned.”

“Native Americans inspire us to think about our names as allegory — with multiple dimensions. To remember that we are on a linear voyage in life, that we should be constantly changing and growing, that our identity consists in how we are seen and judged by others — by what we give, not by what we take. To remember that our names should remind us first of ‘us’, not ‘me.’ To remember that making the world a better place means not only helping others but also caring for nature so that our descendants will enjoy the same bounty we have. To remember that every human being has a sacred spiritual core.” 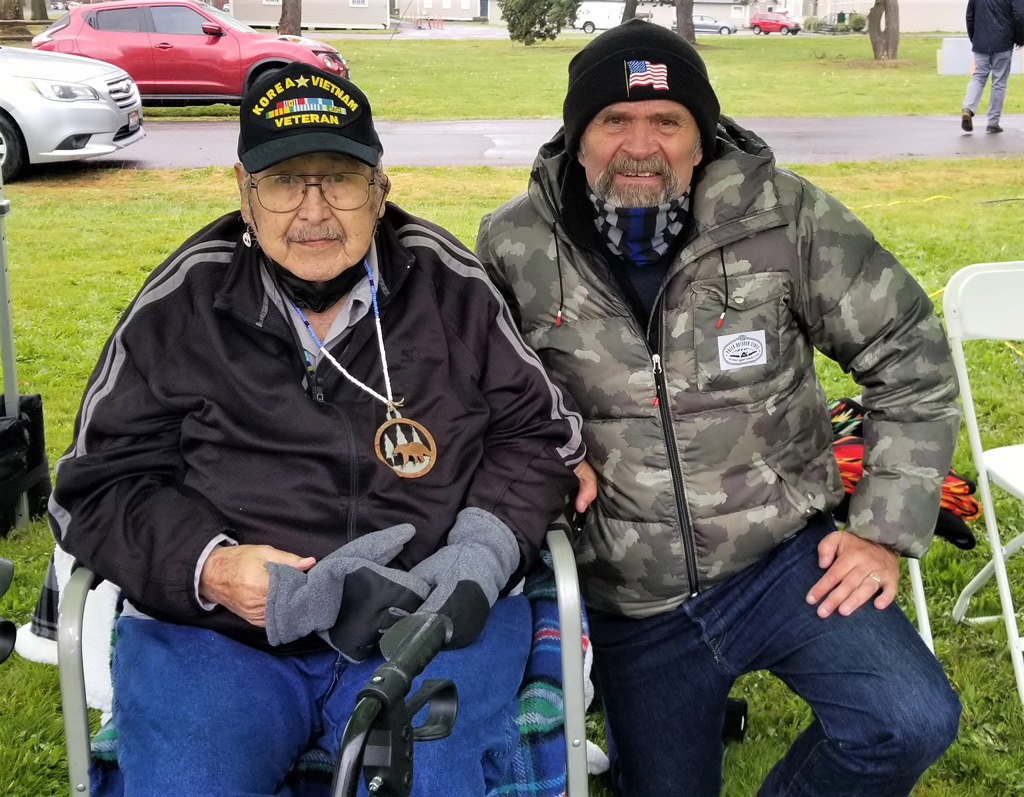 “…it would be an elder that would give you permission to receive a Niimiipuu name.” — Ms. Angel Sobatta

“I remember this recognition of your troop. Wilfred Scott’s e-mail I cannot find or else I would forward this to him.

“Horace Axtell is now passed on, and Scotty’s (Wilfred) wife Bessie passed away a couple of months ago.

“To help us understand this, I’ll need some clarification. When you wore the scarves in battle did you wear them on your head or neck?

“táqmaa? – in general refers to hat.

“scarf – yehet’ayn. There is another word for scarf too that is slip-ping my mind, it has to do with wrapping around.

“Also, we do not refer to Scotty as a “shaman”, he is one of our respected elders/leaders. And it would be an elder that would give you permission to receive a Niimiipuu name.”

“On April 24, 2021, I was both blessed and honored to sit with Nez Perce Elder Wilfred Scott as we attended the Chief Red Heart cer-emony at Vancouver Barracks, Washington State. “Scott, one of the founding members of the Nez Perce Tribal Executive Committee in 1974, was lauded by Arthur Broncheau, the senior liaison for the executive committee, for his ‘willing heart for everything that he does’ involving tribal activities, local powwows and travels to his-torical Nez Perce sites in Montana and Idaho. He is a U.S. Navy veteran and has worked extensively with tribal veterans.”

Scotty and I had not seen each other since April 2003, when members of our Special Forces company attended the Nez Perce traditional warrior homecoming ceremony in Idaho. We enjoyed a warm reunion, and my wife and I were honored to be asked to sit beside Scotty as he presided over the event.

During the ceremony Scotty formally gave me my Nez Perce name, “yehet’ayn cimuuxcimux”, or “Black Scarf.” 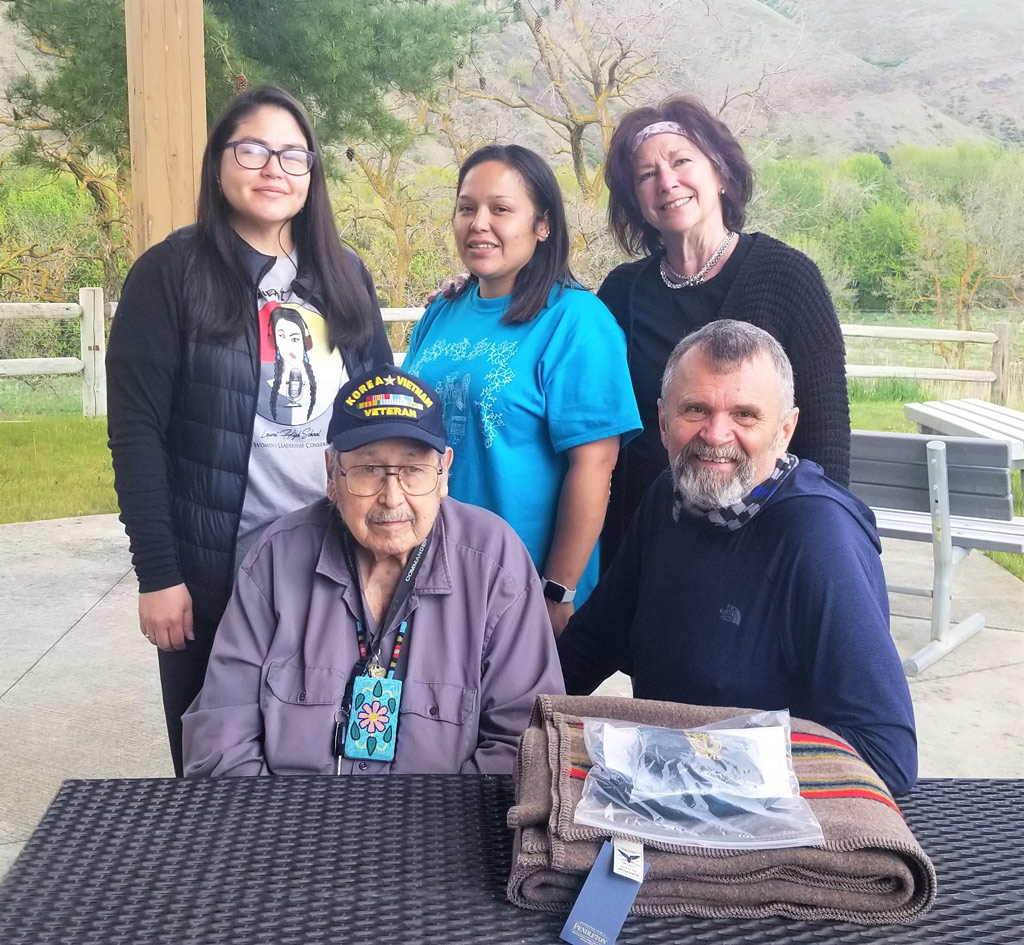 Author and his wife, Carol, with “Scotty” and his relatives during follow-on visit at the Nez Perce Reservation in north-central Idaho. (Photo courtesy Greg Walker)

Several days later Carol and I visited with Scotty and several of his friends and rel-atives at the Nez Perce reservation in north-central Idaho. We presented him with a Pendleton blanket, returning the honor he bestowed upon me when in 2003 he gifted me his Spirit blanket during our welcome home and adoption ceremony. 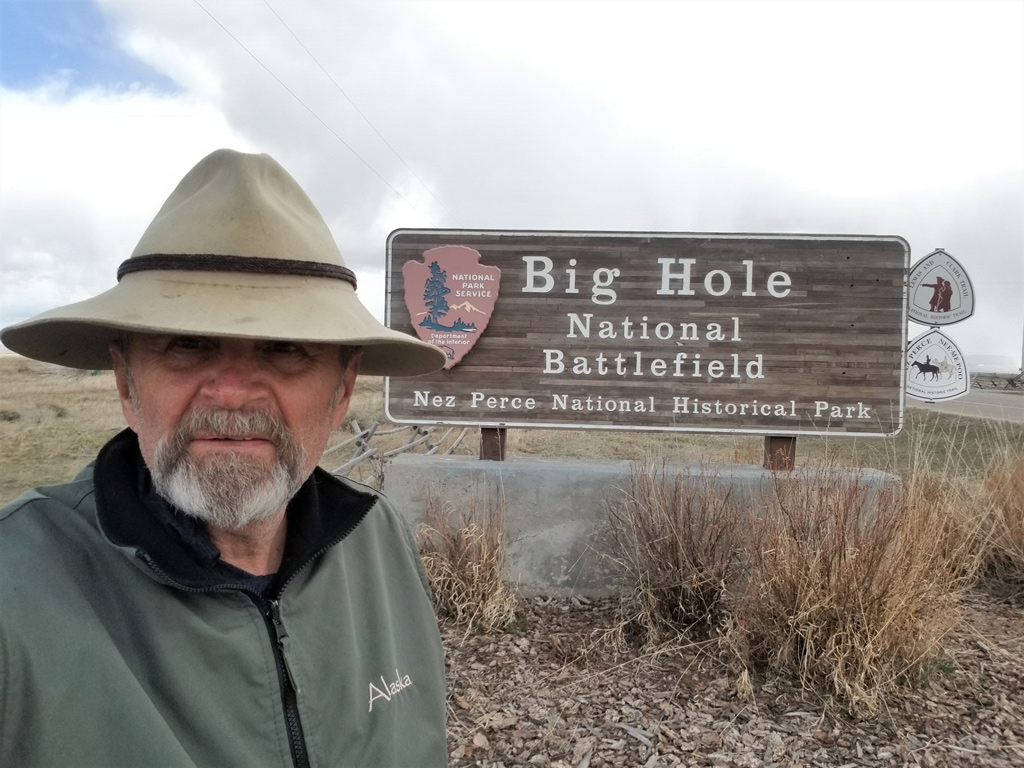 We visited the Big Hole National Battlefield during our trek along the Nez Perce Trail in Idaho and Montana. (Photo courtesy Greg Walker)

We then visited the Big Hole Battleground and paid our respects to those Nez Perce who fell in battle during their attempt to escape the U.S. Army troops pursuing them as they made their way toward Canada. 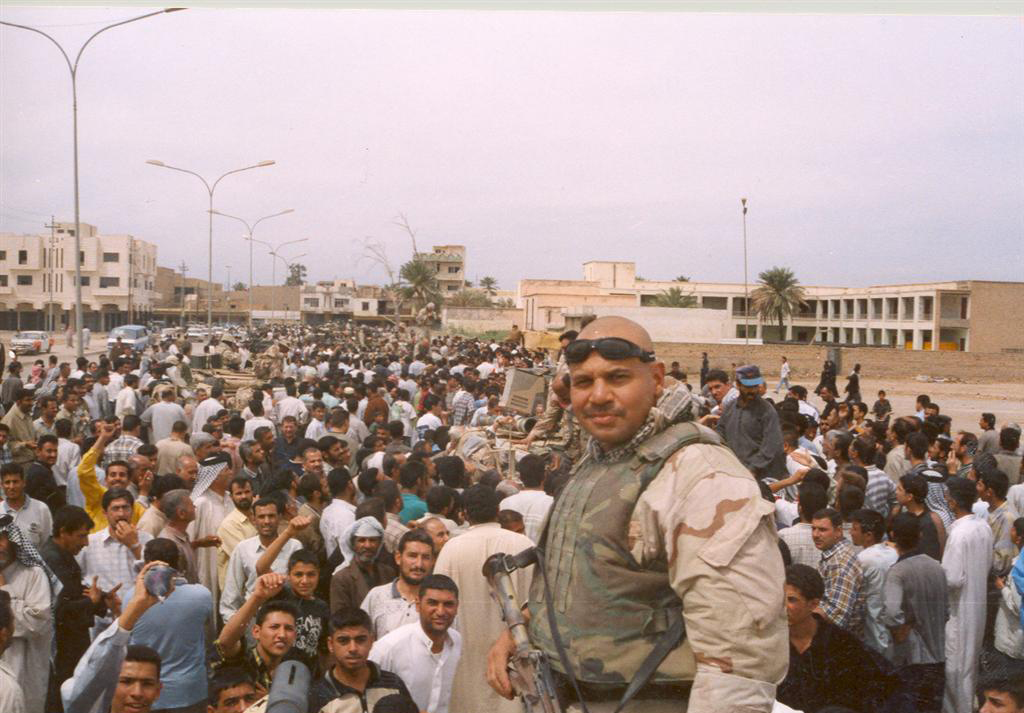 Major Greg Allen graduated from West Point and retired as a full colonel. Greg served with the 2/75th Ranger Battalion, the 1st Special Forces Group and successfully completed the DELTA selection course prior to taking command of A Co – 1/19th. Upon entering Iraq, he assisted in the rescue of PFC Jessica Lynch, among other successful missions. (Credit: Author collection)

Company A, 1/19th Special Forces Group (ABN) is the only U.S. Army unit to be formally recognized, and adopted as Warrior Brothers, by the Nez Perce. To this day an eagle feather flies from the company guidon at our headquarters in Buckley, Washington. 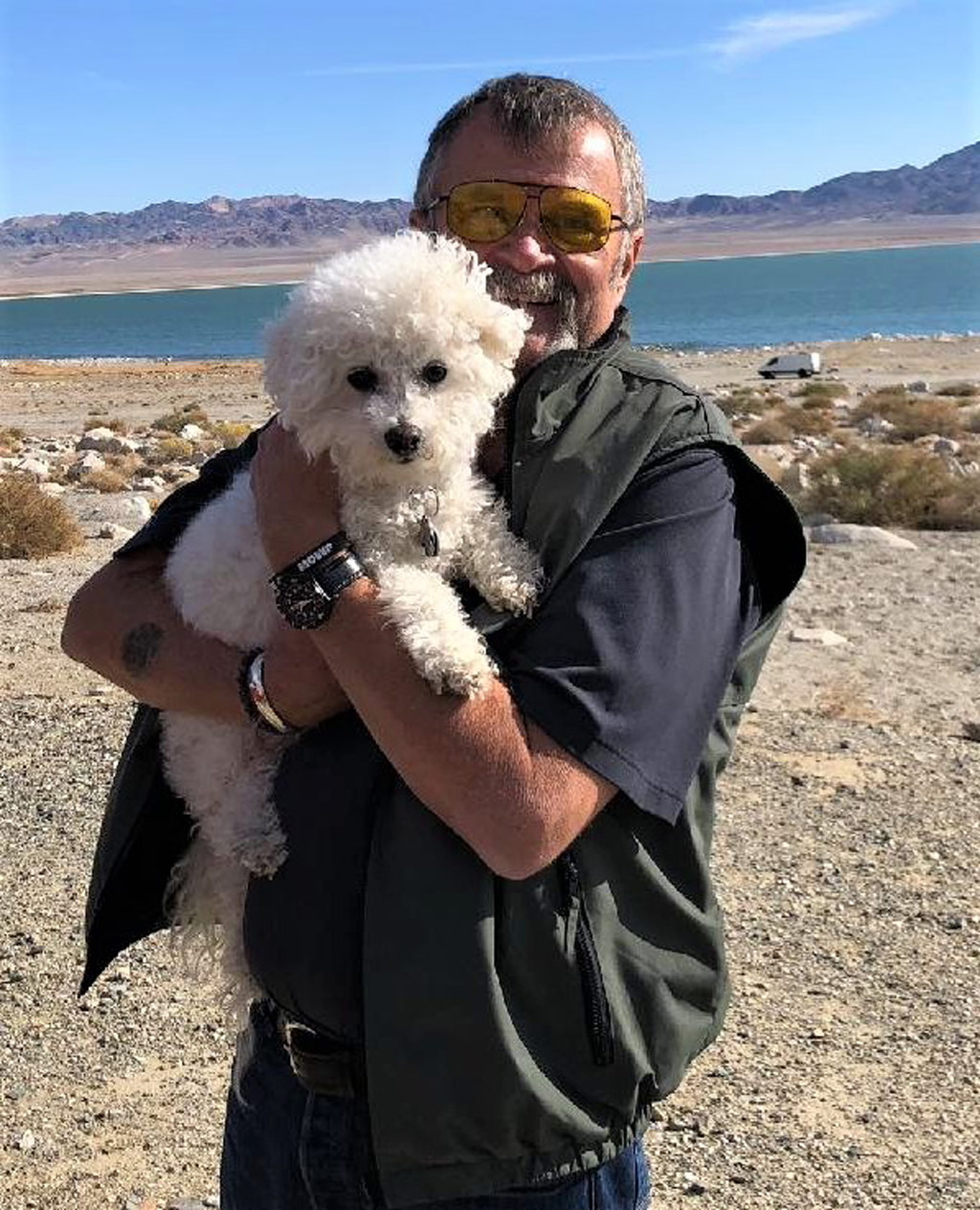