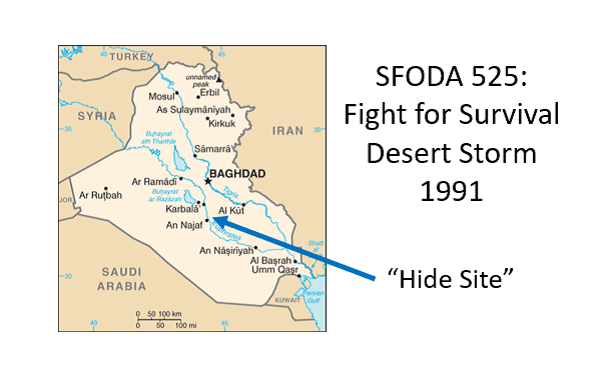 In August 1990, Iraq invaded Kuwait claiming that the country on its southern border was historically a part of Iraq. President George Bush assembled a coalition of nations to defend Saudi Arabia and other Gulf States from further aggressive Iraqi action and to eventually oust Iraq from Kuwait. The US and other nations immediately deployed air assets and ground troops to the Saudi Arabian peninsula. Over several months a massive troop buildup occurred with the positioning of military forces in the Gulf region. The defense of the Arabian peninsula was called Desert Shield.

The offensive military action to relieve Kuwait from Iraqi occupation was called Desert Storm. The air campaign began in mid-January 1991 — lasting over a month. The ground offensive lasted just 100 hours ending on Feb. 28, 1991. On Feb. 28, 1991, the Gulf War came to an end. A coalition of international military forces, led by the United States, conducted an offensive that removed Iraqi forces from Kuwait.

During Desert Storm, several U.S. Army teams of Green Berets were infiltrated deep behind enemy lines to conduct surveillance and reconnaissance missions. Some of these Special Forces teams were compromised by civilians who discovered their location. A few of the SF teams had to fight enemy combatants until they were exfiltrated by helicopter.

On Feb. 23, 1991, SFODA 525, led by CW2 Chad Balwanz, was inserted by helicopter at night, and moved to a hide site to observe traffic moving south along Highway 7, at a location north of the Euphrates River. This 5th Special Forces team would soon find itself fighting for survival against an overwhelming enemy force.

On the night of Jan. 23, 1991, the day before the ground offensive of Desert Storm began, Special Forces reconnaissance teams were inserted deep behind enemy lines in Iraq to gather and report intelligence of Iraqi troop movements. Many were put in areas over 150 miles inside Iraq – far from friendly forces. The teams had at least three members – sometimes eight or more. Each team had at least one communicator responsible for sending and receiving messages from the command and control node.

These Special Reconnaissance (SR) teams were emplaced in enemy territory in support of both the XVIII Airborne Corps and the VII corps. They were on watch for movements of SCUD missiles, elements of the Republican Guard, and other significant enemy activities.

The teams would carry rucksacks that contained water, food, radios, ammunition, batteries for the radios, and more. In addition, other equipment such as a GPS, knife, compass, and medical kit were hung in various configurations on their combat vests. Rucks and other equipment could easily reach over 150 pounds. Add to that the equipment and materials needed to dig and camouflage the hide site.

Most teams would insert via MH-60 or MH-47 helicopters from the 160th Special Operations Aviation Regiment (SOAR) at a location far from the observation site yet within walking distance. Once infiltrated, at night, the team would move by foot overland to the target area, select the hide site, and begin the process to dig in and camouflage the area before early morning light.

ODA 525 had infiltrated in two MH-60 Black Hawks from Task Force 160 and moved overland with their heavy rucks (175 lbs) to the target area. The eight team members dug in at a location, about 300 meters east of Highway 7, that offered a good observation point. The highway was one of the main routes that ran from Baghdad south through the Euphrates river valley. The team finished the process of building the hide site before dawn on the morning of Feb. 24, 1991 and settled in to observe the highway.

As the morning sun came, up the team could see and hear a lot of civilian activity in the area. There were people tending to cattle and sheep; women were collecting firewood; and children were playing. The area had more people in the area than the team had anticipated and intelligence reports had indicated. The soil was very difficult to dig into, so the hide site was less than optimal.

The team was soon discovered by three children — a boy and two girls. The SF detachment reached a critical decision point — what to do with the children. The children left the team’s location unharmed. The team decided to change their location and began movement to another area. Not long after that an adult with Bedouin headdress approached the team with children . . . and saw members of the team. The unarmed adult was allowed to leave – which he did in haste.

Before long, the team had armed Bedouin tribesmen in their immediate area, which was followed with the arrival of Iraqi soldiers. The team was in a tenuous position – miles behind enemy lines, lightly armed, and vastly outnumbered with no ground mobility vehicles to evade.

Within minutes the team was engaged in a battle with the 150-man Iraq force. In the first ten minutes of the battle 40 Iraqi soldiers lay dead and many more were wounded.

The battle continued through the day. The team leader, Balwanz, called in for air support. The team was supported with air strikes that kept the Iraqi troops from overrunning the team’s position. Many of the bombs were dropped ‘danger close’. Estimates of enemy deaths were from 100 to 300 personnel due to the SF team and supporting aircraft.

The SF soldiers used emergency PRC-90 radios and signal mirrors to communicate with the supporting aircraft during the battle. Although the fight had lasted hours, none of the Green Berets were killed or wounded.

By nightfall the fight was under control — the team and supporting craft had kept the Iraqis at bay. The team moved to an area more suited for a helicopter exfiltration. That evening, after darkness settled in, two MH-60s from TF-160 landed near the team’s location and brought the team to safety and to King Fahd International Airport.

These SOF units conducted a variety of missions. Navy SEALs were busy with special operations missions along the shores of the Persian Gulf. Army Special Forces units conducted a number of different missions, to include direct action, strategic reconnaissance, unconventional warfare, CSAR, border surveillance, and coalition warfare support. Some SOF units would be assigned a new mission – SCUD hunting. The SOF aviation units were very busy with infiltrations, exfiltration, combat search and rescue (CSAR), and other special operations missions.

“Voices in the Storm: Against all Odds”, Frontline, PBS. – The Gulf War. Chad Balwanz, the team leader of SFODA 525, is interviewed about the team’s mission. https://www.pbs.org/wgbh/pages/frontline/gulf/voices/2.html

“Chad Balwanz”, Hazard Ground Podcast, Episode 140, Oct. 31, 2019. Hear the firsthand account of ODA 525 and their fight to survive from the team leader of the Special Forces detachment. https://www.youtube.com/watch?v=Ksmg0U2ILo8

John Friberg is the editor and publisher of SOF News.

He is a retired Command Chief Warrant Officer (CW5 180A) with 40 years service in the U.S. Army Special Forces in active duty and reserve components. He has deployed multiple times to Iraq, Afghanistan, and other locations throughout the world during his military career.

After retirement from the military, he worked as a counterinsurgency advisor in Afghanistan (2012-2014), as a Security Force Assistance SME for NATO in Europe and Afghanistan (2015-2017), and providing support to military exercises as a contractor in the U.S. and overseas. He holds a Bachelor of Liberal Arts degree (ALB) from Harvard University, concentrating in International Relations.

NOTE: SOF News provides online content and a free nearly daily newsletter (email) on news, analysis, and commentary about special operations, national security, and conflicts around the world. It has temporarily suspended activities but will return in the fall. You can sign up for the daily newsletter at www.sof.news.