The men and women of the California National Guard knew better.

California Guardsmen have taught the Ukrainian military, trained with them, shared successes and failures with them and just become good friends over the past 29 years.

All this is helping now that the country is under attack.

This came about as part of the National Guard’s State Partnership Program.

First a little history. Following the collapse of czarist Russia in 1917, Ukraine was independent until 1920 when Russian communists conquered the country. It became part of the Soviet Union from 1920 to 1991. The three most notable aspects of Soviet rule were two Moscow-induced famines in the 1920s and 1930s that killed an estimated 8 million Ukrainians, and World War II, that killed another 8 million.

In 1991, the Soviet Union dissolved, and Ukraine declared its independence. The Cold War was over.

The people of Ukraine were of two minds — some wanted to stay aligned with Russia, while most Ukrainians wanted to reach out to the West.

Jump to 1993 when Ukraine became a charter member of the U.S. National Guard Bureau’s State Partnership Program along with Bulgaria, the Czech Republic, Estonia, Hungary, Latvia, Lithuania, North Macedonia, Poland, Romania, Slovakia and Slovenia. Each country was paired with a state, and Ukraine paired with California.

The program was based on an American suggestion to NATO, and it began as an effort to help former Soviet and Warsaw Pact nations reform their militaries along Western lines, National Guard Bureau officials said on background. The program had many objectives including helping the nations become more interoperable with NATO forces, help the partners become more transparent in military affairs and, perhaps most important, helping the nations know how a military works in a democracy.

While the program started in Europe, it expanded, first to U.S. Southern Command and then to the rest of the combatant commands. In U.S. Africa Command, some of the state partnerships pre-date the establishment of the command itself.

Today, there are 93 nations partnered with Guard organizations from all 50 states, three territories and the District of Columbia.

U.S. officials believed that pairing with state National Guards made more sense than pairing with active-duty forces, said the National Guard official. First, the militaries in these countries had missions more closely aligned with National Guard forces than those of the active duty. These militaries could be called upon to assist in disasters and humanitarian crises, just like National Guard personnel help in hurricane relief, forest fires, tornadoes, even snowstorms. The partner militaries often worked closely with law enforcement in a way that mirrored how National Guard troops on state missions sometimes do.

Officials also felt National Guard units were more stable — meaning the personnel didn’t get reassigned every three years. Members of the state guards could stay in place for an entire career. This allowed the state and the partner military personal to bond in a personal way, the official said. “When you pick up the phone to call, you know the person on the other end of the line,” he said.

Trust among military members developed with many partner service members coming to military schools in the United States.

But it was more. Trust was also furthered when partner militaries deployed with U.S. formations to the Balkans. Trust was further cemented when partners fought alongside U.S. service members in Afghanistan and Iraq.

Since the program started, there have been many instances where officers grew up together — they met as lieutenants and captains and followed each other up the ranks. 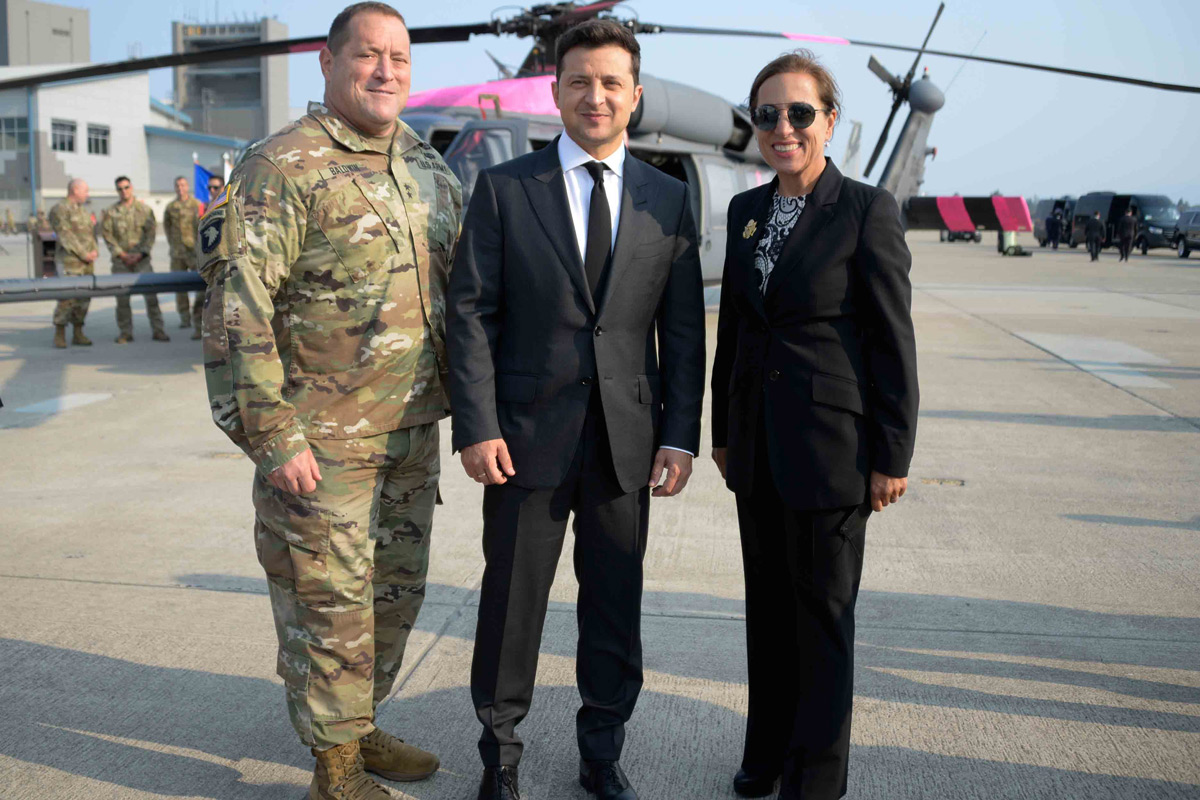 When California Adjutant General Army Maj. Gen. David S. Baldwin joined the California National Guard in 1984, he and his wife hosted a Ukrainian family in California for training under the program.

Those contacts survived the ups and downs of politics in Europe and the United States, he said.

When Russia invaded Ukraine in late February, most pundits believed the Ukrainian military was not up to the task. “Because we work closely with the Ukrainian army, we always thought that the West underestimated them, and the National Guard of Ukraine also,” he said in a recent interview. “We knew that they had radically improved their ability to do kind of Western style military decision making. I have been impressed though, with their ability at the national level, to work through some of the challenges we thought they still had in terms of logistics and command control.”

The Ukrainians have also demonstrated interagency cooperation. “I think the best story is with their Air Force,” the general said. “Our fighter pilots have been telling everyone for years that the Ukrainian Air Force is pretty good. And in the meantime, a lot of other people in the West were pooh-poohing them.”

“Well, the proof is in the pudding,” he continued. “Their Air Force is a lot better than everyone thought except for the California Air National Guard who knew that these guys were pretty good.”

The air over Ukraine is still contested, more than three weeks after the invasion began.

Baldwin said the effort to train the Ukrainian military is really a team effort. California Guardsmen worked alongside NATO trainers and trainers from the active-duty forces — especially after Russia first invaded Ukraine in 2014 and illegally annexed Crimea.

Ukraine’s government turned decisively to the West, and the training took on new importance. Ukrainians were very receptive. Prior to 2014, the California Guard would send a few dozen trainers at a time to Ukraine. After the Russian invasion, this commitment numbered in the hundreds and training accelerated.

This is more than simply teaching infantry tactics, Baldwin said, although Ukrainian soldiers demonstrated the ability to move, shoot and move.

In training areas in Ukraine and California, the Army Guard and Air Guard in California worked to develop Ukrainian capabilities. If they didn’t have the capability, Baldwin worked with National Guard units around the United States to make sure Ukrainian service members got the training they needed.

It was more than small unit tactics, he said. The Guardsmen worked in logistics and sustainment — the lifeblood of any military. They worked to establish and build a Ukrainian NCO corps. They helped train staff officers and in defending against and launching cyber operations.

Guardsmen even worked in the headquarters of the Ukrainian military to establish command and control procedures and help build a Joint Operations Center modeled on what the United States military would have. Guardsmen helped them “reorganize the way that their staffs are organized at the General Staff and at the Ministry of Defense,” he said. “We even imbedded (Ukrainian) staff officers as members of our staff.”

Baldwin went to Ukraine in November 2021 and discussed with Ukrainian military leaders the disturbing build-up of Russian troops on Ukraine’s borders. “At the time, they kind of knew that it was coming, but they didn’t want to believe it,” he said. “It wasn’t until January that the most senior Ukrainian leaders started [to] recognize that this could be a possibility.”

Ukrainian leaders then began talking about specific needs they would have if Russia invaded. “They came within a day or two of predicting when the invasion was going to come,” he said. “But because of that partnership, and our ability to have frank discussions about what they needed in the 11th hour to get ready, I [hope] it very much helped them prepare, and to do so well in the opening hours of the invasion.”

Baldwin said that within half an hour of the Russian invasion, he began getting calls from Ukrainian senior leaders. “The first calls were, ‘Hey, we’re under attack,’ and then the calls through that night were ‘Here’s the help that we desperately need,'” he said.

The first calls were for more Stingers, Javelins and other anti-tank weapons, he said. “Within 24 hours, we had a pretty comprehensive list of all of their requirements for military equipment — both lethal and non-lethal,” the general said.

The California Guard stood up their Joint Operations Center and they were seeing the same things their Ukrainians partners were posting in Kyiv. Baldwin passed the request to U.S. European Command and the Joint Staff in the Pentagon.

“Now there are a lot of formal liaison systems and mechanisms and ways to communicate,” he said. “But the senior leaders still reach out when they have something urgent. That’s just a product of our relationships. Because a lot of these guys that are generals at the top of their organizations, I’ve known for eight or 10 years. So, we have very close personal relationships, and they trust us because they know us.”

ABOUT THE AUTHOR — Jim Garamone is a reporter for the DoD NEWS, which provides news and feature articles for http://Defense.gov, the U.S. Department of Defense’s website.