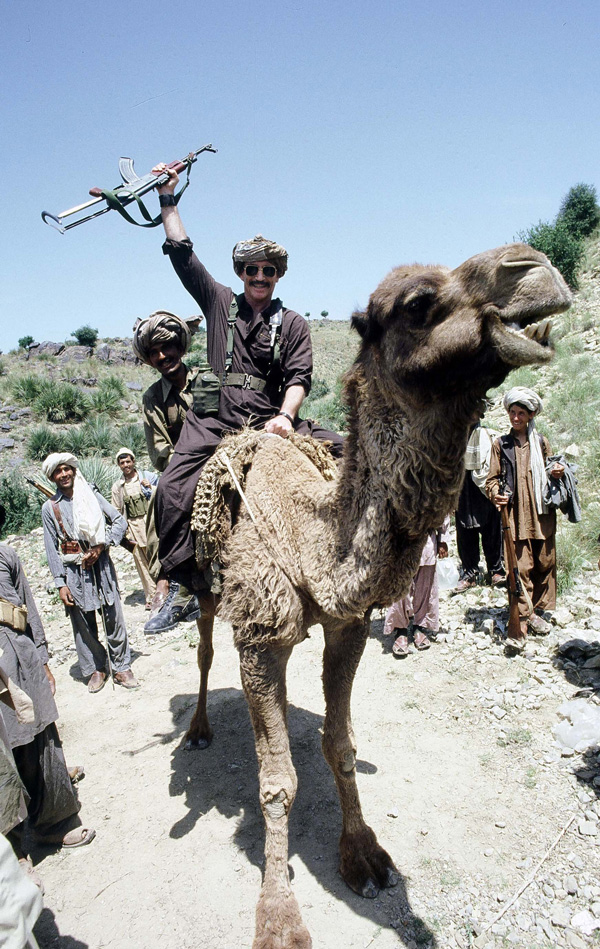 Brown on camel in Afghanistan. The AK is not a prop.(Photo by Jim Coyne)

Sometime in 1975 I read a piece in the local paper that some guy in Boulder CO had started a trade journal for mercenaries. That struck me as one of the nuttier ideas I had ever encountered, but on the other hand they might be interested in Vietnam stuff that I hadn’t been able to sell anywhere. Before my last Vietnam tour I had sold a couple of military pieces to Esquire, but times had changed and to achieve publication about Vietnam in a mainstream publication in 1975 it had to be subtitled mea culpa.

So, I called this guy, whose name, as it turned out, was LTC Bob Brown, and who it also turned out had been a captain in the 5th SFGA in Vietnam. When I told him I had a cardboard box full of stuff I had written about SF in Vietnam, he said he was going to reserve summer camp and he’d swing by and look at it. Why not? It was only 500 miles out of his way.He stayed for dinner. My lady at the time was nonplussed when he ate his salad with his hands. He took my cardboard box back to Boulder and promptly lost it. I had no carbons.

In the next few years I made four trips to Boulder for other reasons, but every time I tossed the SOF offices, and never found my box. Then, more than four years later, in Fayetteville AR, I got a postcard from Bob Poos, the new editor, a former Korean War Marine and AP bureau chief, accepting my article. I had no idea which article, but it was Operation Dumbo Drop, and SOF paid me $500 for it. Eventually they bought the whole box. The article was adapted from a term paper I had done in grad school on the three best stories I had covered as 5th Group Information Officer. It had taken me about two hours to write, and I thought $250 an hour was pretty good pay. Eventually it was made into a Disney movie, and I made about a quarter of a million for it. Not bad for two hours work, but then again it’s about seventy percent of all the money I’ve made in a fifty year career as a military journalist.

Next time I heard from SOF they wanted me to go to Beirut. I did, and wrote them a three-part series that was well received. So I moved to Boulder and started working for them full time. That’s when I got to know Bob. Every individual is unique, but Bob is more unique than most. I love the guy, but I think of him as the world’s oldest seventh grader. He has that boundless enthusiasm, and a knife in the teeth “Charge!” instinct that tends to put him in situations that most people would prefer to avoid, like sitting in an ambush position in the middle of the night in Rhodesia, or hosing down a Soviet camp in Afghanistan with a Dashika. During the time I knew him he made three trips to Afghanistan, getting in firefights with the Soviets every time. At one point he mounted his own insurgency in Laos. 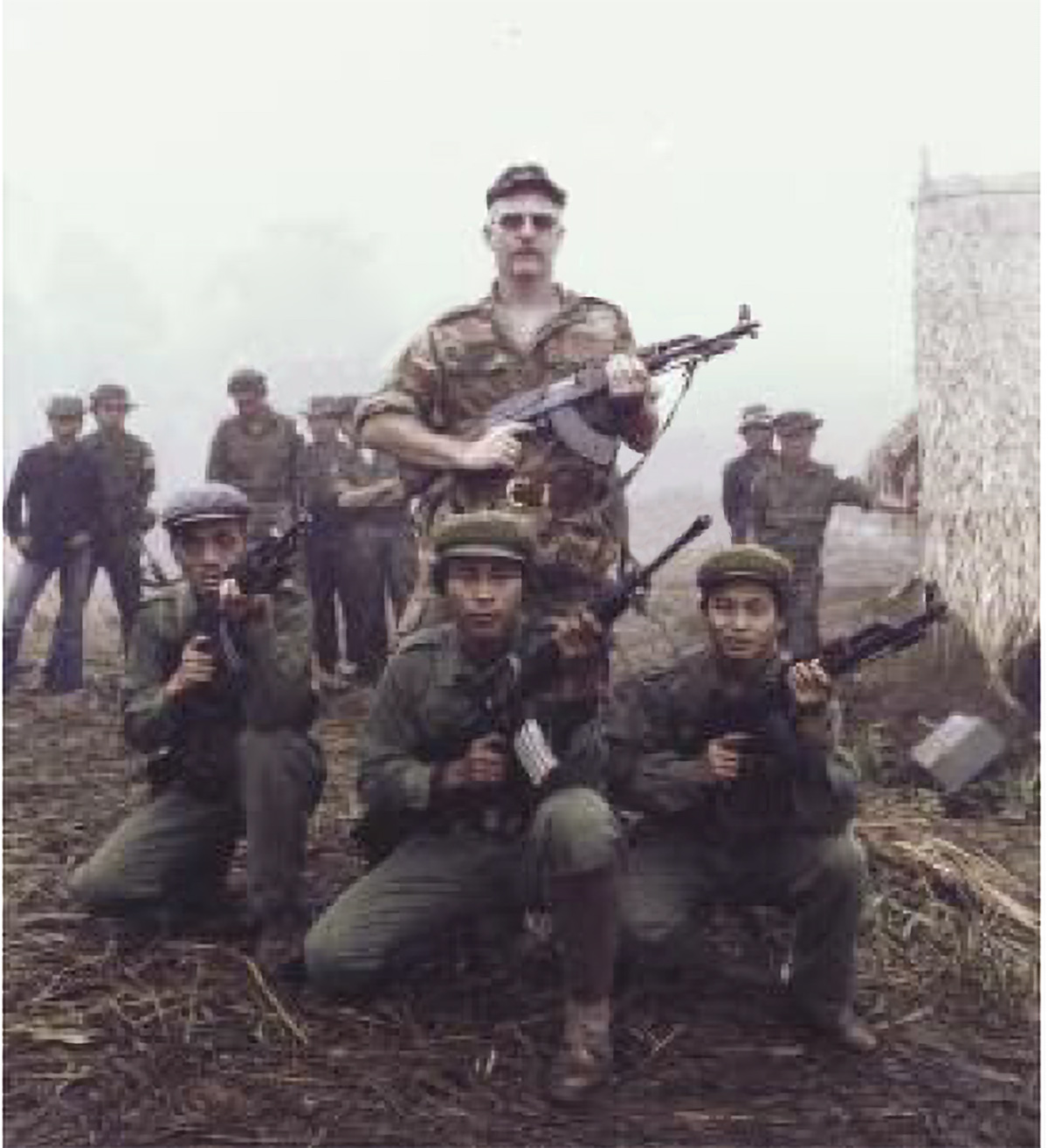 RKB at anticommunist Laotian United Liberation Front base camp inside communist Laos. At one time the camp held 125 armed Hmong who were to assist in search for American POW’s. (Photo courtesy SOF – RKB Collection)

In 1982 he and I, Jim Coyne, SOF correspondent and doorgunner in Vietnam, and Tom Reisinger, the SOF business manager, former SF medic in Vietnam, shared a penthouse apartment in Bangkok with BG Heinie Aderholt, USAF (ret.), and my then wife, Kathy, an ace photographer, administrator, social coordinator and intrepid correspondent. Heinie was there looking for American POWs in Vietnam and Laos, which was the major reason we were there.

Heinie had been the last US general out of Laos. Once he and I went to his old headquarters to transact some business. On the way back he fell into conversation with our cab driver, who told us it was possible to drink cobra blood early in the morning near Lumpini Park. Pay a vendor a little money, and he’d slash a cobra’s throat and you could drink cobra blood directly from the cobra. This was a specific treatment for virility. I wasn’t enthusiastic, but Bob was on fire to try it. “C’mon, we’ll drink cobra blood and take pictures. You can write it up for the magazine.”

He was disappointed when Coyne and I flat refused. I said Coyne would shoot it and I’d write it up if he did, but he didn’t want to do it alone, so we dropped that one. 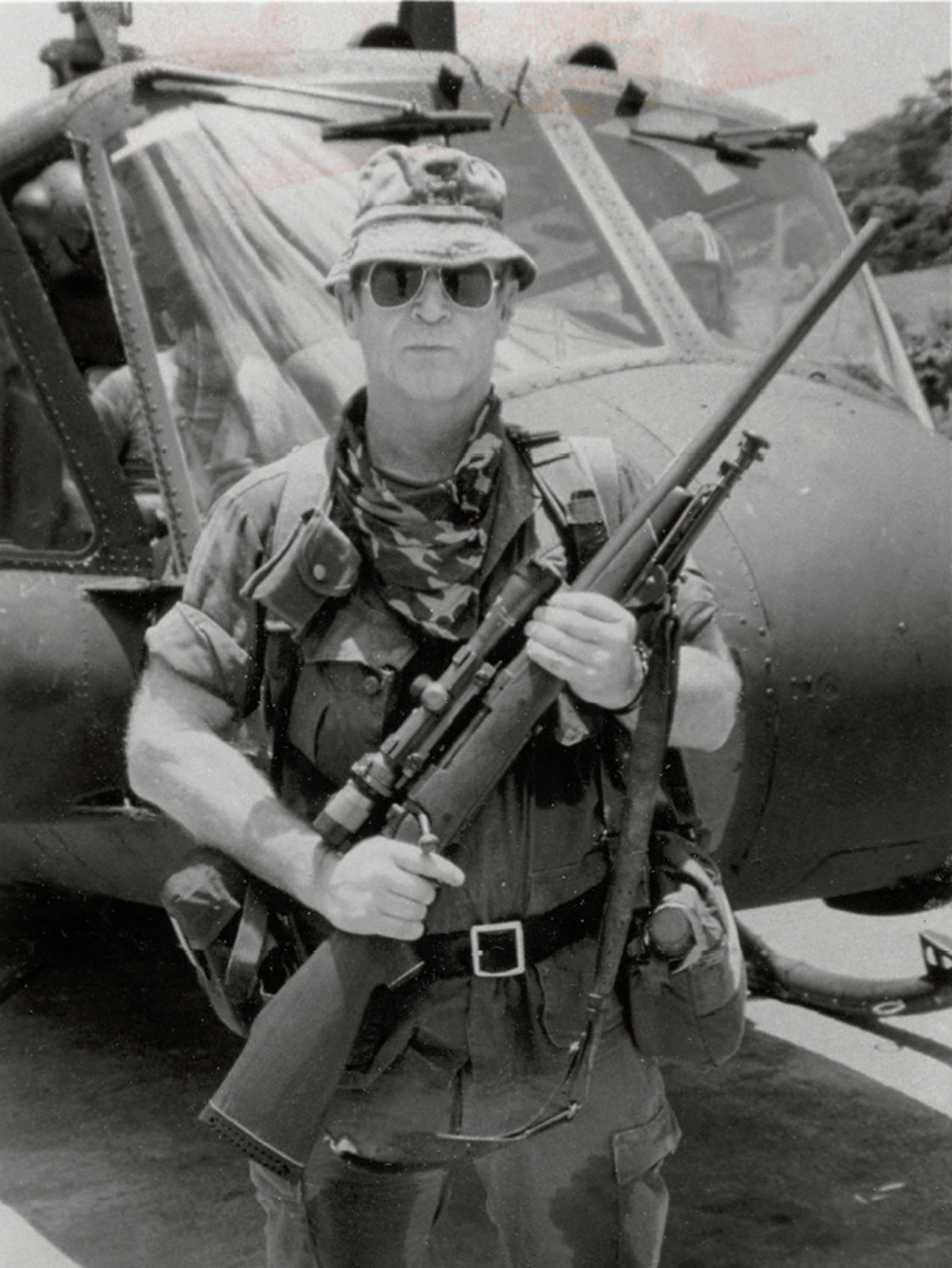 We were in Bangkok for six months. Thailand was in several wars internally and on its borders. In the north it warred with Khun Sa, the Opium Warlord, but also was in contact with the Lao Resistance, the Cambodian resistance, and in conflict with the Communist Party of Thailand and the Communist Party of Malaysia. We had contacts and occasional “contact” with all these people. Brown and I were the two oldest, and we worked out daily to keep up. Coyne and Reisinger did not. We jumped the balloon with Thai Special Forces, and that afternoon jumped a C-130 with the junior class of the Royal Thai Military Academy.

As honored guests we were given the only steerable chutes on the aircraft. I was in the upwind stick and before I could get the toggles free the wind turned me and sent me right into the canopy of one of the cadets. I sprinted across that sucker and slid off the other side about fifteen seconds before my PLF. I’ve often wondered if that kid even knew I was there. If he’d looked up he’d have seen size 12 jungle boots outlined going fast on his canopy. That sucker billowed up around my waist before I got off it.

Our two young studs were injured slightly, but the two old farts who worked out came through it unscathed. 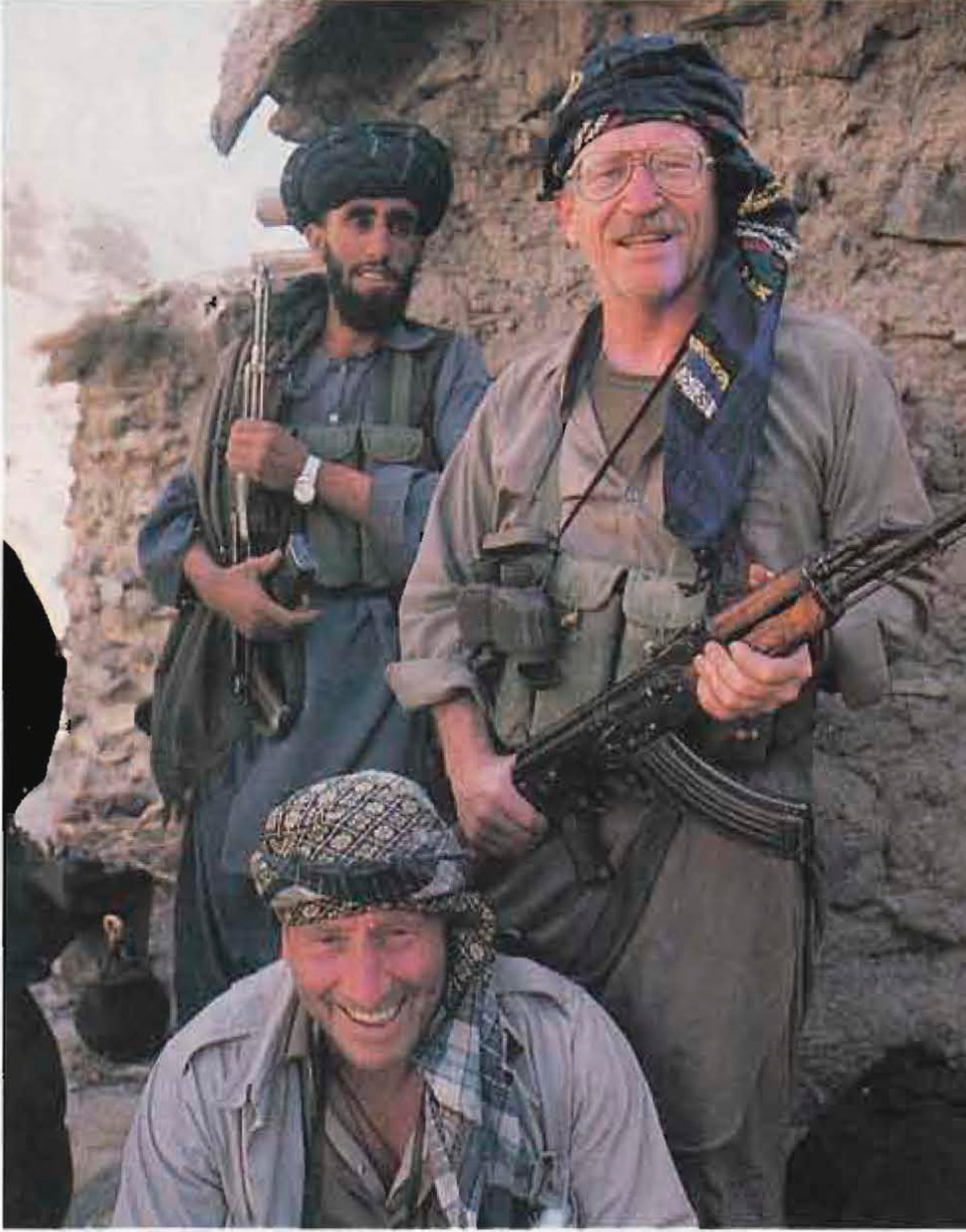 LTC Robert K. Brown in Afghanistan with an unidentified Afghan and a smiling MAJ Mike Williams. Mike joined Special Forces when it was formed, fought with UNPIK in Korea, and went on to serve as a major in three armies, U.S., Rhodesia, and Mike Hoare’s 5 Commando in the Congo. (Photo courtesy RKB Collection)

Bob has a lot of favorable characteristics, one of which is generosity. The number of people he has helped is legion, including third-world countries, down on their luck mercenaries, and me. In two years I covered six wars for SOF, and at the end of that time I was pretty much burnt. He got me a job as Managing Editor of a copycat of SOF, EAGLE Magazine in New York. Who does that?

I’ve sold SOF a few pieces since then, and always maintained the connection. You don’t let a bunch like that go. 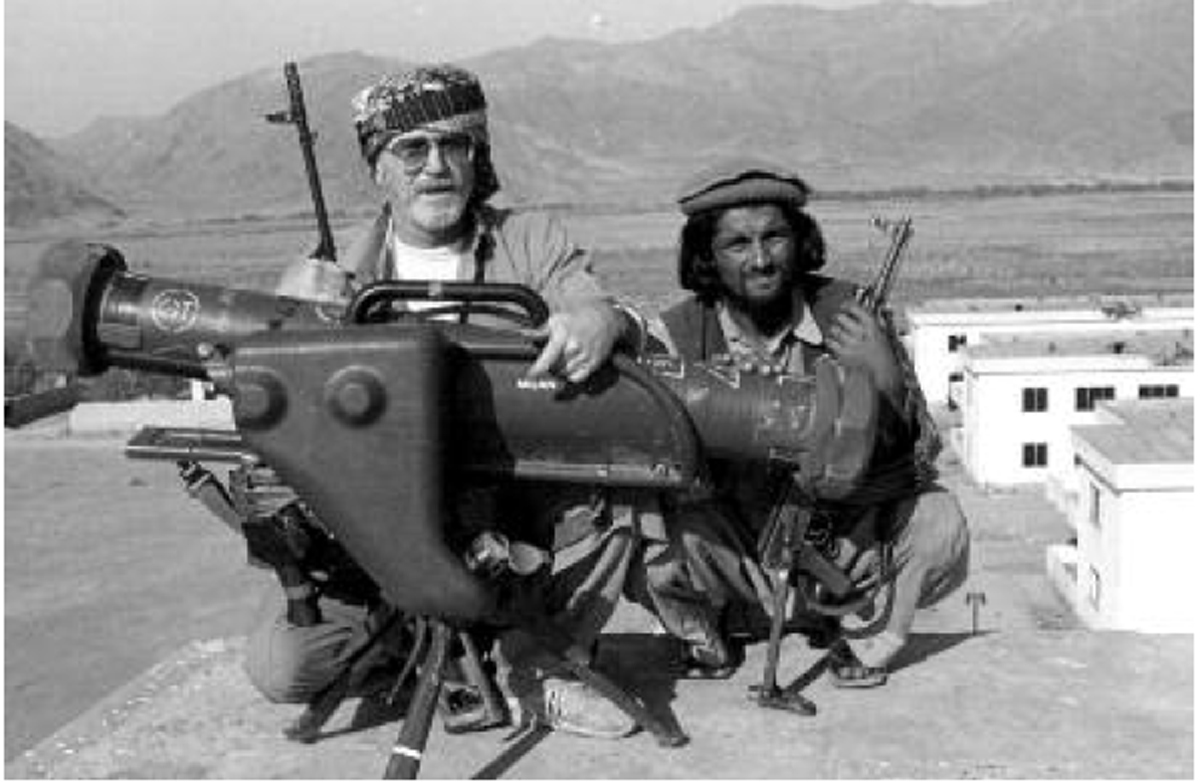 RKB, armed with a Russian Draganov sniper rifle poses with rebel Milan missile outside of Jalalabad in 1989. First photo proving the rebels had such sophisticated anti-tank systems to reach the West. (Photo courtesy SOF – RKB Collection)

That job was hard, and dangerous as hell, but as much fun as I’ve ever had. It had wonderful goofy aspects, like the conventions, which were costume parties with one costume allowed, camo. At one convention in Las Vegas a documentarian named Steve Dreher asked my friend Larry Dring, Mike Force company commander in Vietnam, and perhaps the best small unit leader I have ever known, how you could tell the real guys from the phonies at a deal like this. Larry said, “Well, you could ask to look at their passports. Also, the real guys usually walk with a limp.”

Bob sent Larry to Lebanon to advise the Lebanese Forces militia on tank-killing techniques, on my recommendation. There was a lot of Soviet ordnance in Lebanon and much of it differed from its description in US manuals. Larry brought back a barracks bag full of it, live ordnance, through customs. Nobody checked it and we took pictures and wrote it up for anybody who needed the information. If you wanted to know why a war was being fought, read the New York TIMES. If you wanted to know how it was being fought, read SOF.

A couple of years later, Fred Reed, former Marine in Vietnam and one of the very best writers ever to grace the pages of our favorite magazine, did a piece about SOF for Playboy. It was a great piece, told some improbable stories. I responded by writing a letter to the editor, of which they published part. In the part they published I said Brown is so courageous that, “he has to carry his balls around in a wheelbarrow.” They headlined the excerpt with the title “Testicular Testimony.” In the part they didn’t publish I said Brown was the Hugh Hefner of violence, just as Hef was the Colonel Harlan Sanders of sex. The takeaway from that is that Bob is much more accepting of a joke at his expense than, say, Hugh Hefner.

Bob is ninety now and wants to concentrate on writing some books about his adventures. He has sold SOF to Susan Katz Keating, who is an intrepid journalist indeed. It won’t be the same, but I believe it will continue to be great. 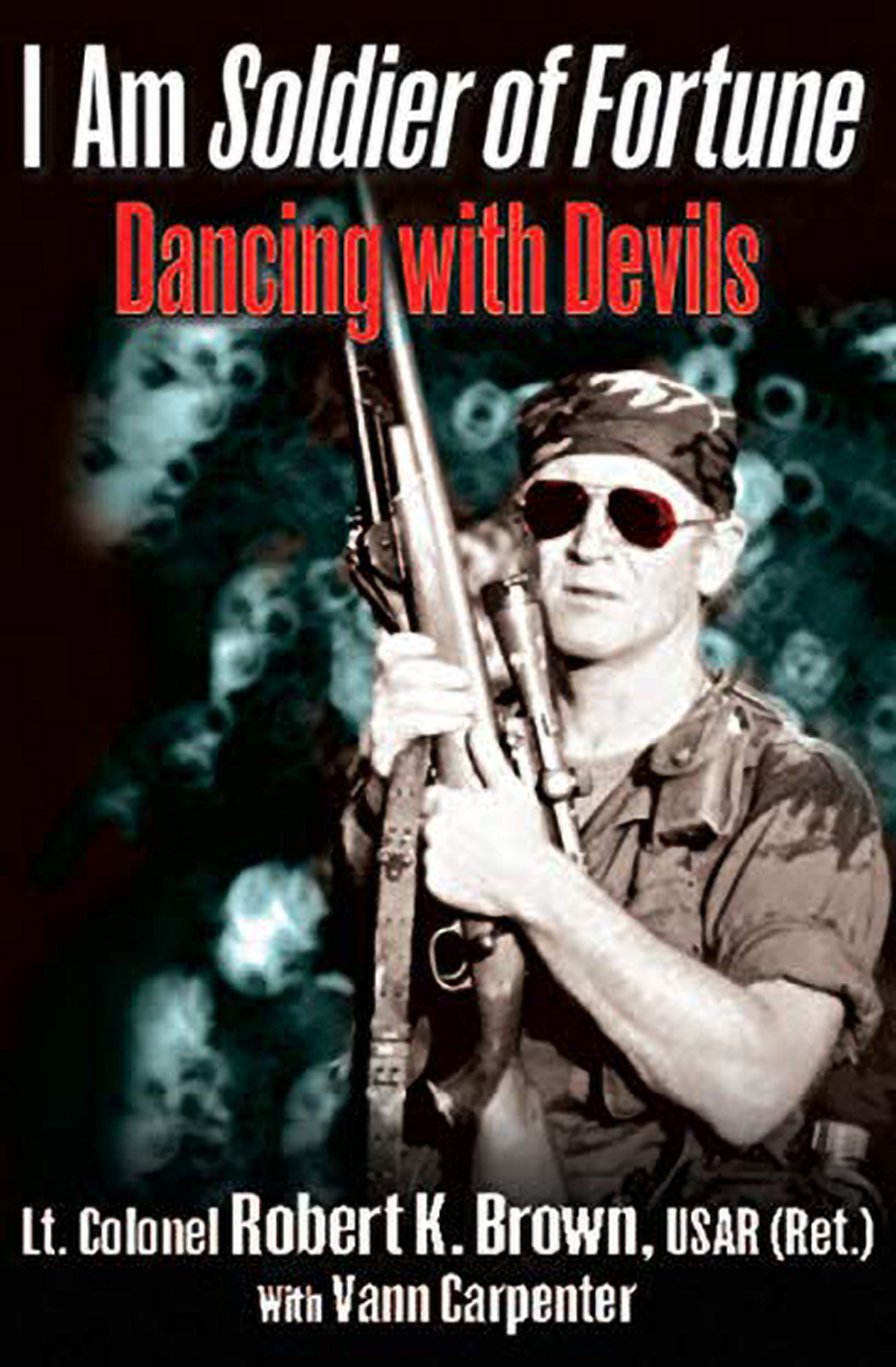 To obtain a copy of Brown’s memoirs, I Am Solder of Fortune: Dancing With Devils, email him at rkbltcol@aol.com

Jim Morris joined 1st SFGA in 1962 for a 30-month tour, which included two TDY trips to Vietnam. After a two year break, he went back on active duty for a PCS tour with 5th SFG (A), six months as the B Co S-5, and then was conscripted to serve as the Group’s Public Information Officer (PIO). While with B-52 Project Delta on an operation in the Ashau Valley, he suffered a serious wound while trying to pull a Delta trooper to safety, which resulted in being medically retired.

As a civilian war correspondent he covered various wars in Latin America, the Mideast, and again in Southeast Asia, eventually settling down to writing and editing, primarily but not exclusively about military affairs.

He is the author of many books, including the classic memoir War Story. HIs new book, The Dreaming Circus will be released in July 2022 and is available for pre-order — information available at https://www.innertraditions.com/books/the-dreaming-circus.