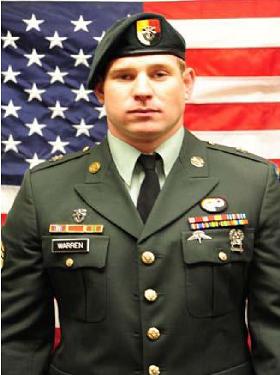 Staff Sgt. Kyle R. Warren, 28, died of wounds sustained from an IED blast during a combat reconnaissance patrol. He was a Special Forces Operational Detachment-Alpha team medical sergeant assigned to Company C, 1st Battalion, 3rd Special Forces Group (Airborne). He deployed in support of Operation Enduring Freedom in July 2010 as a member of the Combined Joint Special Operations Task Force – Afghanistan. This was his second deployment.

SSgt. Warren is survived by his wife Sandra Warren of Hope Mills, N.C.; his mother Lynn Warren of Bedford, N.H. and his father Del Warren of Long Beach, Calif.

Psalm 138:7
Though I walk in the midst of trouble, you preserve my life; you stretch out your hand against the anger of my foes, with your right hand you save me.