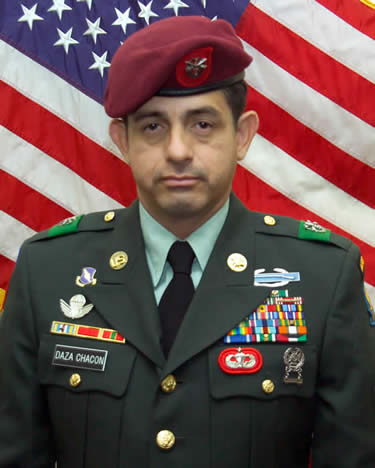 DazaChachon, 38, was a native of Diamondbar, Calif. He joined the Army in November 1997. After a break in service, he reenlisted in the Army in 2005 and was assigned to 3rd Battalion, 7th SFG (A) as a senior cryptologic linguist in April. He spoke Spanish and was a college graduate.

He served with the 508th Infantry Regiment (Airborne) in Vincenza, Italy and participated in deployments in Southwest Asia, Bosnia, Rwanda, and the Sanai. He also served with 1st Battalion, 504th Parachute Infantry Regiment, Fort Bragg, N.C., during Desert Shield/Desert Storm.

Psalm 18:2
The LORD is my rock, my fortress and my deliverer; my God is my rock, in whom I take refuge. He is my shield and the horn of my salvation, my stronghold.