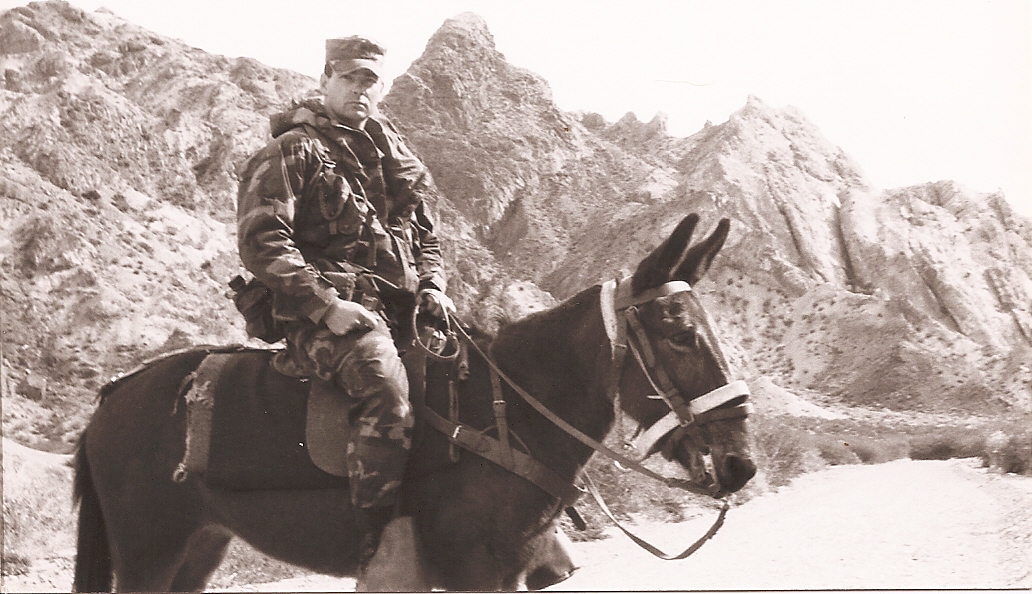 After serving 1 year with the Signal Company I was transferred to ODA-751 where I served until 1994. My first ODA was a mountain warfare team in its infancy. We spent a great deal of time and effort relearning the lost skills of mountain fighting: climbing, rope work, mule packing, etc. During my time with 751 we deployed on missions to Argentina, Brasil, Ecuador, Peru, and Panama with plenty of stateside training missions as well. The best of which was mountain warfare training in Jericho, Vermont. I was with 751 during the Panama invasion but managed to piss off the god of war and so was left behind at Bragg to attend Advanced Non-Commissioned Officer Course (ANCOC). I tell you, I have shit for luck, and I could not talk my way out of this school slot! The only good news was that after ANCOC I was able to get a slot in HALO school where I had the best time of my military career. Shortly after I was selected to attend Operations and Intelligence school where I earned the 18F MOS

I was requested by Special Forces Branch in 1994 to work a special assignment with the Defense Intelligence Agency with duty in the US Embassy, Guatemala. After a couple of months in D.C. attending the Defense Attaché School, I was actually given an additional 71L (clerk/typist) MOS. Talk about a fish out of water…

Served as the Intelligence NCO for the Defense Attaché Office (DAO), US Embassy Guatemala (GT) until 1995. At the DAO I found ways to be useful as the Colonel was an Infantry officer and had no idea what I was supposed to do besides type the reports the office usually produced. I became the weapons NCO, the motor pool NCO, I met US Navy vessels needing supplies and whatever else I could get my hands on to stay mentally occupied. I managed to get involved with Guatemalan Parachute Battalion where both the Marine Major (Superior Mustang Officer) that I worked with and I both earned our Guatemalan, Master Parachutist badges (HALO) and were able to represent the US in the Pan American parachute competition. The Major and I spent many hours roaming the Guatemalan country side in search of the insurgent forces and in general having a great time. It was during this time that Ecuador and Peru decided to squabble over a stretch of land along their mutual border. USDAO Peru sent out a request for assistance during the fighting and I was soon on my way back to Peru. During my earlier mission in Peru I managed operations out of the US Embassy in Lima, Peru and as such knew many of the personnel and systems. It was an easy fit and the Navy Captain that was in charge of the office was pleased. Another SF success

In 1995 I returned to Ft Bragg and the 2nd Battalion, 7th SFG (A) and was given ODA-746 as the Team Sergeant. 746 was a strategic reconnaissance team that was transitioning to become one of the first High Altitude High Opening (HAHO) teams. My extensive jump master record and HALO experience made me the go to guy for the assignment. This was a great detachment with many exceptional team members but I had cut my own throat earlier in my career by establishing my ability to coordinate large unit operations. Too soon I was put into the Company Operations sergeant role where I did my best to see that ODB 740 and the rest of the company was well looked after. I managed, through much maneuvering, to get my company SMG to send me on deployments to Columbia, Argentina, Bolivia and Puerto Rico, so it really wasn’t all bad. I finished my career of 21+ years in this assignment